On Thursday, April 7, three giant bulbs were unveiled by IAA-Fresh. The bulbs have been adopted by IAA-Fresh and are located at 3 different locations in the bulb area. A fourth bulb will be unveiled later this month and will be placed at the new office of IAA-Fresh in Hoofddorp.

A total of 80 of these giant bulbs will be placed in the bulb region, and two cycling routes will be set up to admire them all. These cycling routes are intended to grow into the largest work of art in the world. A 125 km route with 80 Giant Bulbs, all painted by artists from the bulb-growing area.

"We as IAA-fresh are happy to give something back to the region and the entire flower bulb industry, which gives us so much through the transports by air as well as by sea." 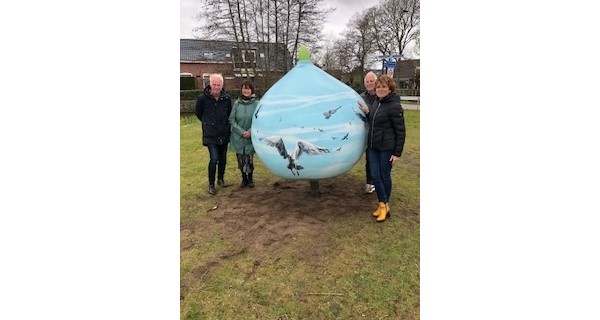 This bulb, called "vrijheid" (freedom), was painted by Iet Langeveld from Lisse. In the picture from left to right: Peter Kales with artist Iet Langeveld and Piet Segers and Loes Beelen (sales manager) on behalf of IAA-Fresh. 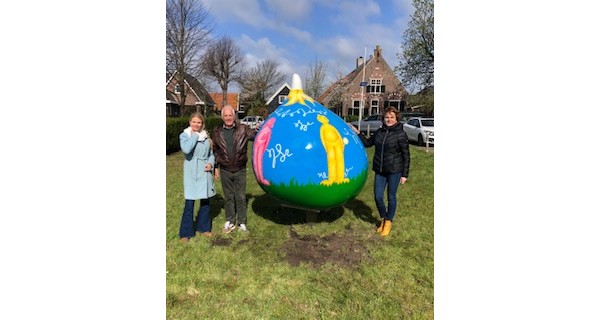 This bulb, called "Personificatie van bloemen" (Personification of flowers), was painted by Susanne Visser from Lisse. In the picture from left to right: Eva Toele, Piet Segers and Loes Beelen. This giant ball has been placed at the Nursery "Bij de Boerderij" in Sassenheim where Eva Toele and her staff do fantastic work. We are delighted that we were able to place a giant bulb there. Susanne Visser was unfortunately unable to attend the unveiling due to study reasons. 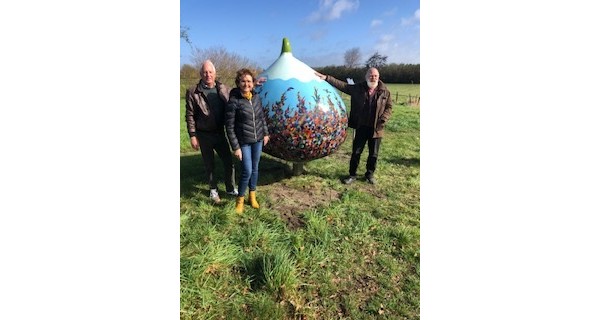 This bulb, called "Fata Normala", was painted by Wout Ruigrok from Lisse. In the picture, from left to right: Piet Segers, Loes Beelen and Wout Ruigrok.

Bulbs for sale
There are three sizes of bulbs: small, medium and large. In Lisse, the bulbs are painted in an old shop building, where the small and medium-sized bulbs are also sold. Several of them have already been sold to tourists passing by. One giant bulb has also been sold and will be sent to America, and there is also one in Belgium. Yesterday, Queen Maxima and King Willem Alexander received a small bulb from the Guild.

Extra information about all the giant bulbs that have already been finished and/or placed can be found at: www.gildemeestersbollenstreek.nl