The American Rhododendron Society has released the results of its 2022 Rhododendron of the Year Awards and two Proven Winners ColorChoice cultivars have earned regional awards.

The committee selects rhododendrons for adaptability in eight regions of the United States and Canada. The site states, “To be selected for a Rhododendron of the Year award a plant must have excellent foliage and flowers, have an attractive plant habit, be pest and disease resistant, and be cold hardy for the region.” 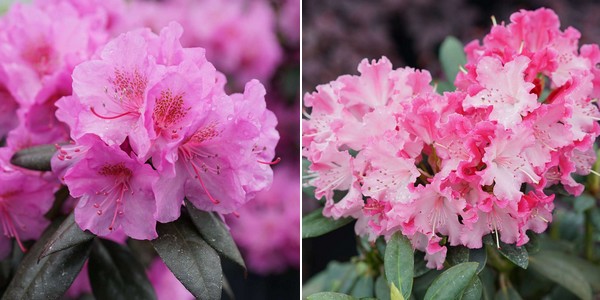 Proven Winners ColorChoice Black Hat and Dandy Man Color Wheel rhododendrons were named Rhododendron of the Year for the South Central region. For each region, the Plant Award Committee chooses an elepidote and a lepidote rhododendron, a deciduous azalea, and an evergreen azalea.

Also bred by Dr. Ranney, Dandy Man Color Wheel rhododendron is elepidote, with the large-sized foliage that typically comes to mind when referencing rhododendrons. They are called elepidote because they lack the scale-like structures on the undersides of the leaves. Dandy Man Color Wheel rhododendron has ruffled pink blooms that transition to crisp white, creating the effect of three different colors blooming at once. Handsome evergreen foliage, excellent disease resistance, and heat tolerance make this NCSU hybrid an adaptable, widely usable broadleaf evergreen.

More information about the American Rhododendron Society can be found here. The entire line of Proven Winners ColorChoice rhododendrons are readily available by contacting an account manager from Spring Meadow Nursery or a local wholesaler.