After two years of waiting, the lights finally go green for the 10th edition of the Dutch Lily Days. Also, Onings Holland will open its doors to welcome all colleagues in the global lily business. More than 500 lily trials will be physically exposed in the test greenhouse of Onings in Honselersdijk. Still, the Dutch Lily Days will get a digital touch thanks to Lily League. Visitors can vote for their favorite varieties both physically and digitally at onings.com. After the Dutch Lily Days, there will be a new Lily League Top 50. 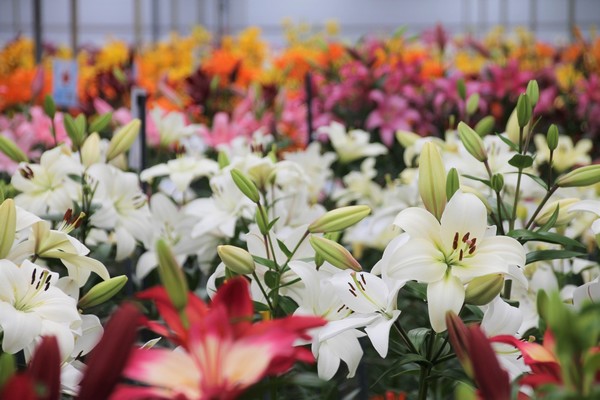 The battle of the lilies has begun. The first votes are being casted at this very moment, and on June 13th, the first Monday after the Dutch Lily Days, the lines will close. It promises to be an exciting competition where the 50 most favorite lilies of 2022 in the world will be decided. Tell the world which lily has the most beautiful flowers or is the most preferable to work with by casting your vote via the online lily database of Onings. After voting on your favorite lily, there is a possibility to select four other varieties. Follow the socials of Onings to stay updated about the Lily League and the Dutch Lily Days.

Sea of color
The wide lily range of Onings Holland is professionally planted and exposed in multiple ways in their test greenhouse. This means that between June 7th and 10th, you can see, smell, and feel more than 500 different lily varieties that are flowering almost simultaneously. Both traditional and modern varieties, such as pollen-free lilies and the new TA-hybrids, are to be found under one roof. Already before the existence of the Dutch Lily Days, Onings Holland strives to present its complete range of lilies to the world in the flowering stage. That allows visitors to judge the quality of each variety and compare different varieties with each other.

Lily League Top50
A physical Dutch Lily Days, organized in the “old-fashioned” way, is not separated from the online world. The connection between a physical and digital experience is what makes the world a little bit smaller. From now, visitors of the website of Onings Holland can choose the varieties they prefer for the Lily League top 50. This can be done simply by finding your lily of choice in the lily assortment and click on ‘vote’ on the variety page. You can also find out what varieties you like the most by visiting the test greenhouse of Onings in Honselersdijk and cast your votes there.