Horticulture in India is at the beginning of an evolution from open field to covered crop production. In the short term, this mainly concerns the mid-tech segment, in which many existing growers are making great strides by investing in relatively simple net and foil greenhouses. Syngenta is stimulating this development and wants to look at longer-term developments with DGD.

Navanish Singh works as National Protected Crop Manager at Syngenta and is based in Pune in Western India. "I have been with Syngenta India for fourteen years, but this position has been with me for only two years. It is a new position, brought into being by the evolution from outdoor crops to covered crops that have been happening in my country in recent years," he says.

With the growth of the urban middle class, the sales market is currently undergoing strong development. Especially younger city dwellers with good jobs increasingly prefer to buy quality vegetables and fruits in modern supermarkets, of which more and more are being added, instead of in open-air markets. Supermarket chains need stable and consistent quality, which requires growers to cultivate differently. This demand from the market is stimulating the transition to covered crops.

Polyhouses and nethouses
In India, covered cultivation essentially means cultivation in the cabinet types 'polyhouse' and 'nethouse,' according to Navanish. The total covered cultivation in the country is currently around 4,000 hectares. By far, the most important covered crops are bell peppers and cucumbers, accounting for about 90 percent. Other crops grown in the greenhouses include cherry tomatoes, lettuce, and brinjal. "The first and cheapest step a small grower can take is to build a greenhouse with a deck of insect mesh, the net houses."

For these growers, this is a huge advance. They keep out a lot of insects, and the indoor climate is somewhat regulated against too large temperature differences. "We have very different climate challenges here than in the Netherlands. No cold against which we have to stoke, but heat and long dry periods or, on the contrary, periods of hard rains. It is already a huge step forward for growers if they can protect their crops against this. 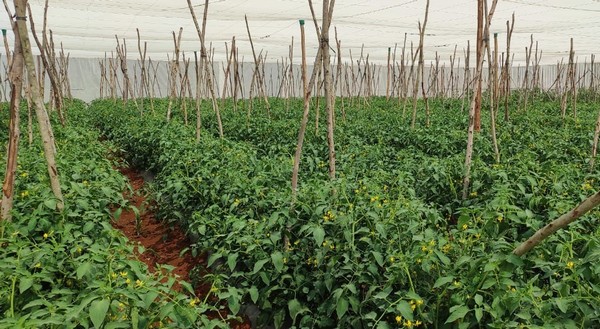 Bamboo
More than half of covered cultivation takes place in nethouses, the rest in polyhouses. A greenhouse covered with film goes a step further in terms of investment and offers an even higher degree of protection against severe weather conditions and insects. There are also two options for greenhouse structures. The cheapest and most accessible investment is a greenhouse frame of bamboo poles, to which the insect nets are attached. The other choice is a frame of slim aluminum poles and arches. This construction has the advantage that the crop can also be tied up and grow well in height.

Navanish: "Especially being able to keep insects out is a big win for growers. India has a high pressure of insects that transmit many viruses. The ability to apply drip irrigation is also a great improvement. The transition to covered cultivation increases production by about 30 to 40 percent and provides growers with greater harvest security. In all respects, you can grow in a more targeted way and use water, crop protection products, and fertilizer more efficiently, he concludes.

Tech-savvy youth
Syngenta sells both vegetable seeds and crop protection products in India. "But 60 percent of vegetable growers are small growers, who hardly have a budget for crop protection products. According to the company's vision, the easiest way to advance horticulture in the large Asian country is through projects that help smaller growers invest in cover crops.

"We see that in India, the number of small growers in rural areas is decreasing because their children do not want to continue the business. At least not in the way their father works, outside in an unprotected field without an irrigation system and technical tools," says Ruud Kaagman, Global Crop Unit Head Tomato at Syngenta.

"Young people are moving to the city and going to work. Growers' sons who succeed their fathers are eager to move toward much more modern operations. Therefore, more intensification and scaling up is the future of the Indian agricultural sector. The government now sees that too and is encouraging these growers to switch to covered cultivation, in part through subsidies."

Young people in India are very technically oriented, and they want to apply that to horticulture, he notes. "Because they don't have a lot of money to invest, other parties and we try to help with that. In case they are very open to technology. They already like to follow apps with information on things like the weather, crop protection, and market prices.

Other varieties
The move to covered cultivation gives them the opportunity to develop their business further. You get a much higher yield, with certainty about your harvest. "Growers can then start to plan. After a season, they have money left over to invest in their business again instead of remaining dependent on suppliers and traders. If they have some profit left over, they can put money into an irrigation unit, improving their greenhouse, or into better seeds. In this way, they will gradually improve their position," Kaagman expects.

The move to covered cultivation also means that other varieties are needed, he points out. "In outdoor cultivation, tomato varieties that grow as bushes to a height of one and a half meters and are then tied up. In covered cultivation, you use varieties with very different genetics. You need plants that you can grow on the wire much longer and that give tomatoes for a long time."

Because the distribution of new suitable varieties takes years, Syngenta is looking to see if there are varieties from its existing programs for Mexico, Turkey, and Spain, among others, that also do well in India. "This means as much as you need a period of several years to test and select varieties through."

"Water retention and storage are the most important for cultivation. There is a lot of precipitation, but it is distributed very unevenly throughout the year. The rainy season in many regions is followed by a long period of heat and drought. Furthermore, the chain as a whole needs to improve, he says.

"There is a great shortage of good cold storage facilities. Poor rural infrastructure, huge distances, and busy roads can make the transport time from the fresh produce to the consumer in the cities huge. To keep fruits and vegetables fresh, you then need refrigeration, and that is still sorely lacking. As a result, much of the quality of our horticultural products is lost.