"Coating the greenhouse protects chrysanthemums against burn and color fades"

Bright-colored disbud chrysanthemums are sometimes sensitive to flower burn. Kamuro Flowers tried out various coatings to protect the flowers against excessive radiation. ‘It is impossible to predict which chrysanthemum variety is vulnerable to excessive sunlight. There is a green variety that is known to be highly sensitive. But we have another green variety that is far less sensitive,’ says Arthur van Zeijl. 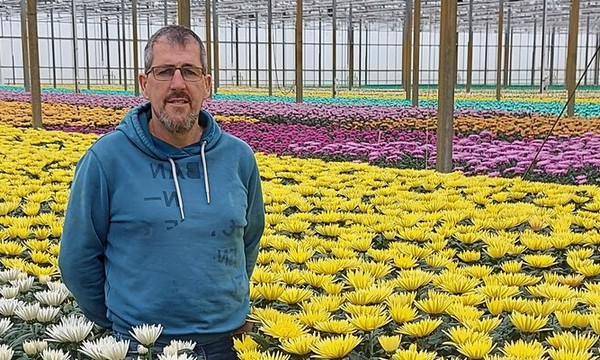 Together with two of his brothers, he owns Kamuro Flowers in the town of Hoek van Holland. They specialize in disbud chrysanthemums, a single large flower on a solid stem. These special chrysanthemums are grown by removing the side shoots.

They then sell these exclusive flowers through the Zentoo growers association. ‘Especially the colored varieties – yellow, pink, red, green – are sensitive. When you do not apply any coating to the greenhouse, the flowers experience problems with evaporation. The flower color fades, or they even burn, and the ray florets turn brown,’ he says.

Protection
This is why Kamuro Flowers has been using some kind of coating for years. ‘We originally started off with ReduSol. That did eliminate direct radiation, but it was not satisfactory. It always is a bit of search: there are chrysanthemum varieties that are able to handle radiation very well. There also are sensitive varieties that need to be really well protected.’

This is why they switched to ReduHeat, a coating that blocks heat radiation while it lets through a large part of the growing light (PAR). ‘This was much better for the flowers. However, while it blocked the heat, we still lost some growth.

Redifuse IR
Based on the experience of colleagues and the advice of their crop consultant, they tried out ReduFuse IR. They now have three years of experience with this product. ‘The coating reduces the heat radiation and diffuses the light. There are no longer any spots with direct radiation, which creates nice and even conditions. It is nice and even for the crop, and it is also more pleasant for everyone involved. You no longer feel the heat when you are working inside the greenhouse,’ he says.

Van Zeijl no longer needs to screen the crops as often under this coating, although the screen is still needed. ‘When radiation reaches 600W, you have to do something when the vents are wide open. If you do not use the screen, the plants are exposed to direct sunlight through the open windows. On the other hand, with ReduFuse IR, you can keep the windows closed longer so that the CO2 and moisture are kept inside much better. That results in extra crop growth.’
Van Zeijl is very positive about this coating: ‘There has been much less burn in recent years. While we may never reach 100%, we are well on our way.’

Dismal Summers
The summer of 2021 was rather somber and rainy. Did he regret having this coating during this time? ‘No, not at all. There also were weeks with warm weather and high radiation levels. This causes the flower buds to become very hot. This represents a high risk. It disrupts bud development, which results in abnormalities in the flower later on. It doesn’t really matter whether it is 25°C or 30°C outside; the bud simply gets too hot. ReduFuse IR is insurance against these types of conditions. It just results in more uniform growth,’ he says.
‘Moreover, we are located on sandy soil here. Too much radiation in the summer can dry out the top layer. ReduFuse IR provides good protection for this as well.’

Would it be a good idea to stop growing the most vulnerable varieties and look for alternatives that are more resistant? ‘Yes, we are thinking about this. But even then, I would keep using ReduFuse IR, albeit perhaps a thinner layer. It provides assurance, is better for the interior climate, and it provides for a more pleasant work environment.’