Three young horticultural professionals have reached the final for the inaugural Young International Grower of the Year Award.

Looking after the future of the ornamental horticulture industry is vital, which is why the International Association of Horticultural Producers (AIPH) has partnered with Jungle Talks to introduce a new category to the AIPH International Grower of the Year Awards 2022.

The new award recognises the ambition of young entrepreneurial professionals between the ages of 25 and 40 who participated in the Pro Manager Mastercourse organised by Jungle Talks. Entries have been assessed and three young professionals have reached the final.

Chris Rocheleau has experience as a Head Grower at three nurseries in the USA. He has a Bachelor of Science in Plant, Soil, and Insect Sciences from the University of Massachusetts Amherst. Currently, Chris is a National Sales Manager for ForemostCo, USA, where he leads a team to create a library of growing cultural and technical sheets. 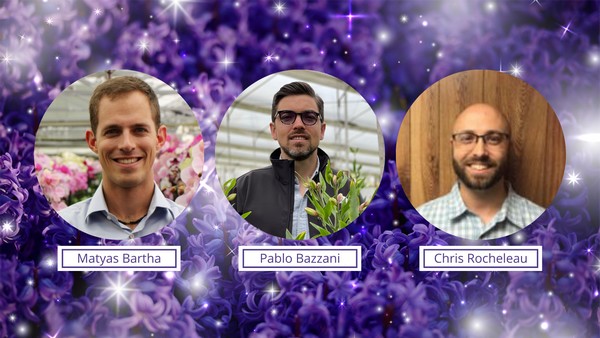 Pablo Bazzani is General Manager of Plazoleta Flowers, Colombia, where he is responsible for leading and supervising financial, production, sales, and logistics procedures and results. Prior to this role, he gained experience as a Marketing Assistant and Marketing Manager for Perfection® Group, Colombia.

The finalists will present their business ideas to the jury, which is made up of four expert horticultural entrepreneurs. The judges are: Leonardo Capitanio, AIPH Vice-President and CEO of Vivai Capitanio (Italy); Wouter Duijvestejn, Owner of Beyond Chrysant (The Netherlands); Stephanie Berkhout, Lead Grower at Qualitree (Canada); and Puck van Holsteijn, CEO of World Horti Centre (The Netherlands).

The winner will be announced at the AIPH International Grower of the Year Awards Ceremony on 14th June 2022 at GreenTech Amsterdam starting at 6pm CEST. The evening event includes a drinks reception with a range of food to fill stomachs as guests network with others in the industry.

Tickets for the awards event cost €50 (incl. VAT) per person. Groups of five tickets are available for the discounted price of €200 and groups of ten for €350. Tickets can be purchased here: aiph.org/event/igoty-2022