The value of the lost crops is estimated to be over 95.55 crores

Just when farmers were recovering from the damage caused by last year’s monsoon rains, the pre-monsoon showers in May have wreaked havoc on horticultural crops in Karnataka, damaging crops on a total of 8,972 hectares, shows data from the Horticulture Department. The value of the lost crops is estimated to be over 95.55 crores. While Kolar, Belagavi, and Haveri were the worst affected districts, seasonal favorites mango and grapes besides bananas were the worst-affected crops. 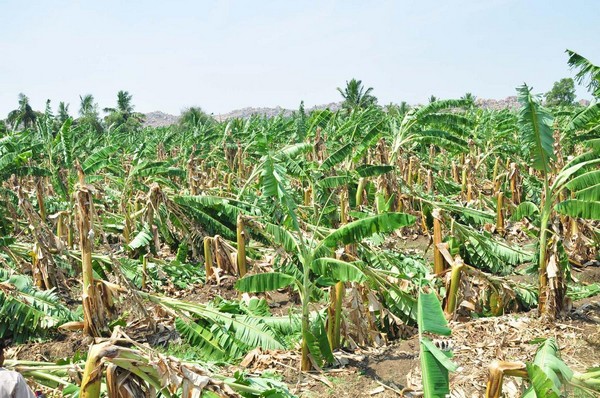 Banana plantations were majorly damaged in the Kalaburagi district.

An official of the department said this kind of crop loss usually does not take place in May and cited the gusty winds as the sole reason for this extent of the damage. “The winds this time were such that even the roofs of poly houses flew away. There was no way for farmers to protect their crops. Even if they used tarpaulin sheets, they would not hold against the wind. During monsoon, some horticultural crops rot because of the rain. But during summer rain, the wind causes the fruits and vegetables to fall off,” they explained.

Although the department collects data from each district, there is no system in place to find out the stage at which the crop was damaged. “We do not get to know if they were in pre-bearing or bearing stage as different farmers have different planting schedules. To find out their stages, losses need to be traced through a survey. It is very time-consuming. Hence if 33% of crops are damaged in a hectare, it is considered crop loss. Anything less than 33% is very common due to natural conditions,” the official said.

Read the complete article at: www.thehindu.com