By 2027, Dutch growers will have to cultivate with (near) zero emissions. It is a new dot on the horizon after a zero discharge requirement had already been introduced on 1 January 2018. This was initially supposed to be in 2021. Some growers were surprised by the early introduction.

For Van Dijk Heating, too, the introduction came sooner than expected. They don't want this surprise to happen again. That is why the company is already fully committed to a sodium eliminator, despite the fact that the legal necessity still seems relatively far away.

A prototype of this system, which goes by the name of Sorem, has been running at a Dutch pepper grower since the end of last year. The system must complete the picture for water treatment because, with the Ecoster, Van Dijk Heating already has a drain water disinfector on the market for many years. Joek van der Zeeuw, Sales Manager at Van Dijk heating: "A sodium eliminator like this is an absolute necessity for growers who are going to work in a closed system to reuse their drain water."

Removal
The removal process is based on ion exchange using a resin column and additives. The additives (nitric acid, caustic potash and CO2) are converted into potassium nitrate, a common fertilizer.

The open structure gives the resin column a large active surface, which binds a lot of sodium. As soon as the saturation point is reached, the resin column is “discharged” in a separate process stage. The concentrated sodium solution drains into the sewer. Most of the additives remain behind in the system, where they make a second contribution as a nutrient component in the form of potassium nitrate. "The net use of additives is therefore very low," says Joek. 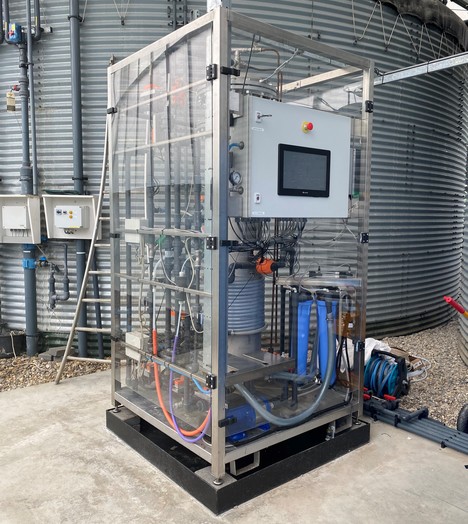 On average, one unit is enough to keep the water system on a 10-hectare farm sodium-free and closed.

In recent years, the focus in terms of water reuse was mainly on viruses. With the Ecoster from Van Dijk heating, which works on the basis of heating, growers combat viruses. Joek: "The principle of heating has existed for a long time, and we have been using it successfully in horticulture for over thirty years. Even with the emergence of new technologies, we have noticed that there is a group of growers who continue to opt for heating, precisely because it is such a simple principle that is easy to understand."

However, now that growers want to recirculate drain water, an extra installation is needed. With a Sorem sodium eliminator, Van Dijk heating is going to offer growers such an installation under their own management. They will present the system at GreenTech in Amsterdam in June. Van Dijk Heating can be found at GreenTech at stand 01.542.