On Sunday 5 June, a rose baptism with a special story took place at Floriade Expo 2022 in Almere, the Netherlands. In the garden of the Culture Group Roses, a new red garden rose was named 'Rosa Matchis'. This name refers to the foundation of the same name that ensures that patients with leukaemia and other serious blood disorders get the best possible donor for a stem cell transplant as quickly as possible. 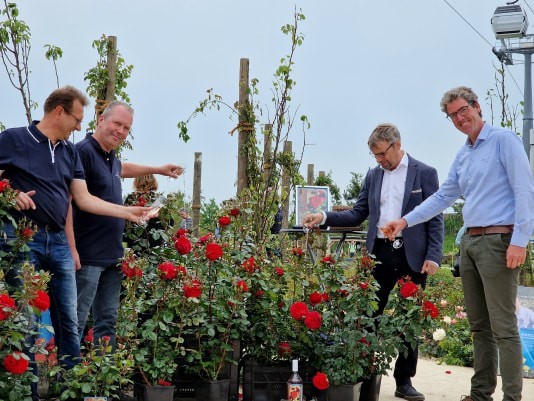 A story with a happy ending
Christening the rose was the express wish of Patrick Wijnhoven, a former blood cancer patient. The rose grower from Wanssum was diagnosed with leukaemia at the age of 28. After several treatments, only one option remained to cure him: a stem cell transplant. There was no matching donor in the family and so the search began. The chance of finding a match varies per person but it is never easy: for some people the chance can be as high as 1 in 50,000. Eventually the Matchis Foundation found the match with an anonymous donor abroad. Meanwhile 24 years ago Patrick was successfully transplanted with stem cells by an anonymous donor. This allowed him, after some time, to get on with his life and he did. He married and had two children.

A symbolic red garden rose
There are fewer donors than recipients in the Netherlands,' says Jaap Dijkman, director of the Stem Cell Donor Bank. And because Patrick Wijnhoven is grateful for the second chance at life that he has been given, he now makes it his mission to draw attention to the importance of having enough donors. And he does so in a very beautiful way. With a red garden rose, grown by Jan Spek roses from Boskoop and selected together with Patrick. The colour is not a coincidence, but refers to the blood cancer he has been cured of. Part of the proceeds of the sale of the rose will be donated to the Matchis foundation. Growing a new rose that is ready for sale takes years. In 2015, this new variety was created through a cross. But again, the chance of a good result is small and therefore hundreds of thousands of crosses are made in the hope that there is one good result among them. The parallel is inescapable and the symbolism complete.

The garden rose can be seen at Floriade, where the rose was christened on Sunday 5 June in the garden of the Culture Group Roses. This naming ceremony was performed by Jaap Dijkman, director of the Stem Cell Donor Bank, Alex Spek of Jan Spek Rozen, Jaap Smit, a dendrologist (tree expert) of Floriade, and Patrick Wijnhoven himself. The red garden rose is available from rose nursery De Wilde, is suitable for planting in the ground or in a pot and flowers from June until far into the autumn.