"We want plants to retain their maximum productive potential for longer"

"We recently received feedback from a Spanish grower on the application of Croptimum. After a sandstorm at the end of March, he saw a huge dip in his production, but in the crops where Croptimum had been used, the dip was much smaller. These are nice, interesting results that confirm what we have already seen in a lot of research," said Arjen de Haan of Crop Health Vision International. He has been Commercial & Business Development Manager at the producer of biostimulants for greenhouse horticulture since February.

At the HortiContact horticultural fair in May, many growers made their first acquaintance with this relatively new player on the market. The company was founded last spring, although the company's roots go back further. "Five years of research preceded the founding," says Arjen, who himself had not heard of CHV until he saw a vacancy, and it caught his attention. "I came across a job posting, and it appealed to me. I wasn't really looking for something new, but I sent an e-mail and started a conversation. With biostimulants, you can do something to the plant that is not so easy to understand but yields real results. It is a nice challenge for me as a salesman and as a former grower." 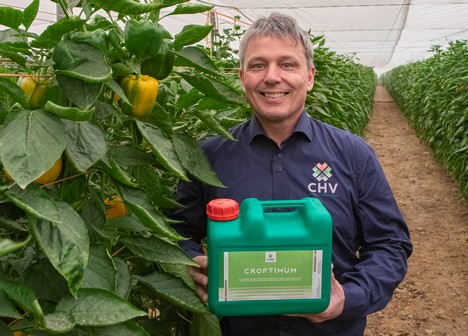 Arjen de Haan in a Spanish greenhouse with the product Croptimum

Stepping into horticulture
The origin of CHV International is in AHV International. That abbreviation stands for Animal Health Vision, a Dutch biotechnology company that has been commercially active in animal husbandry for over ten years. The focus there is on improving the health of animals. Prior to the official founding of CHV, there was, in Arjen's words, "research in plant cultivation that was gradually becoming a little more mature." Since its founding, that research has been greatly intensified.

"Lex de Boer, Head of Innovation at AHV and a true orchid enthusiast, took the first steps in researching various crops. To set up CHV, we looked for true horticulturalists. Arnold Kloostra came from horticulture and, with Gertjan Streefland and Jan de Rooy from AHV, founded CHV." 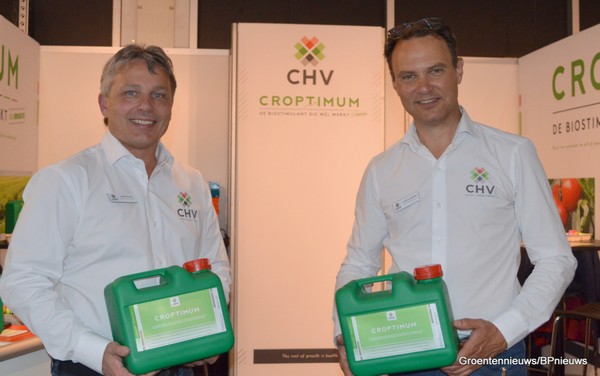 Arjen with Arnold Kloostra at HortiContact 2022

Many trials, also commercial ones with field growers
On the website of the still young company, there are already many research results from all kinds of crops. What is striking is that many results come from Spain. "The reason for this is simple," explains Arjen. "Immediately after our founding, many trials were started in the Netherlands in tomatoes and cucumbers. Those continued into the autumn, but in the meantime, we have done a lot of field trials in Spain during the winter season, and Croptimum is being used commercially. You now see many results on the website. The Dutch trials have since been followed up, with other crops being added. Moreover, based on the Dutch data from 2021, actual, practical use has started at about fifteen growers."

That there is still much to learn makes the job challenging, says Arjen. "For example, we are now learning that our product also works well with open ground crops, such as broccoli and beans. At the same time, growers are already achieving great sales and results."

Application
After more than a year of using Croptimum, the CHV International team's preliminary conclusion is that it works best when applied through drip irrigation. "You really need to get the product to the root and do so as efficiently as possible. The fact that our product is not made of organic matter like many other biostimulants is an advantage here. It doesn't cause contamination in piping systems. Our product is based on purified plant molecules and therefore does not cause any problems in the labyrinths of drippers either."

With Croptimum, CHV International is focusing primarily on 'reproducing crops.' "By that, I mean crops like roses, where you have new stems all the time, or tomatoes, where the plant keeps growing clusters. That's because we are committed to making crops resilient. You don't use Croptimum on very young plants right at the start, but a little later. After a few treatments, repeated every week, and a bit of induced stress, the crop starts producing its own substances to make itself resilient; you obtain a plant that can take a beating."

The right approach to increased production
In this sense, an important period is approaching for Dutch greenhouse producers. Summers can easily stress a plant. "You have very hot days, the water quality declines, or water is left in the mat. A more resilient crop can withstand that better. Although all kinds of techniques have been used here in the greenhouse to optimize cultivation, we have already seen that the use of Croptimum allows the plant to produce optimally for longer. This has been observed in less high-tech crops, such as those in Spain, but also in rose-growing in Kenya and Colombia, where we already see major differences emerging. Consider the example of the sandstorm, which reduced the amount of light for four days, leaving growers unable to turn the lamps on. At such a time, a more resilient plant turned out to record a lower dip in production."

Arjen acknowledges that there are already many suppliers of biostimulants on the market. That sometimes makes it difficult for a new player to get the growers' attention. "Sometimes they have heard so much already that they stop at the word biostimulant. That's why I try to explain first and foremost what our product does. I think it is important to explain what 'increased production' means in our case. By this, I mean allowing plants to retain their maximum productive potential for a longer period of time, even under stressful conditions for them. The best part of going down this road together is seeing results in the crop. That is what growers want, and I, who was once also a grower, can fully understand it." 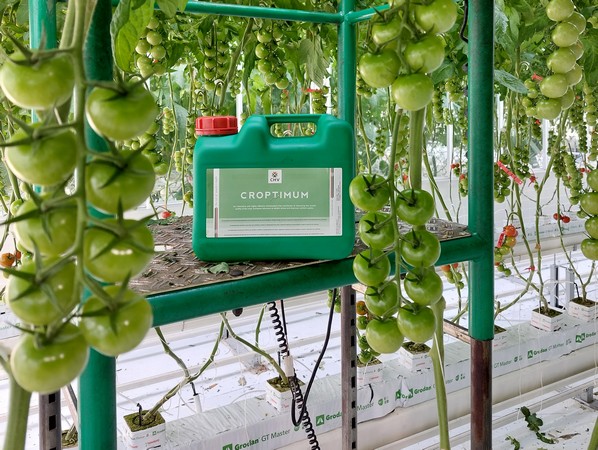 International
In fruiting vegetables and ornamental crops, the necessary data has already been collected. As for soft fruit, CHV expects the first results soon. And in organic cultivation? "At HortiContact, we have already seen many interested organic growers at our stand. Growers who can only use certified organic products will have to be patient because the registration procedure for these products is still being completed. But growers who want to grow in a greener and more sustainable way and reduce their MRL levels can already use Croptimum.

Arjen is focusing on the Netherlands, Belgium, and the United Kingdom. There, Croptimum is already being used commercially in tomatoes and cucumbers, among other crops. He is also training a new colleague who is going to work for CHV in Spain and is making a start in Italy and following up on projects in Ethiopia. "The other day, I was in Spain. It's super cool when you get to see the results achieved there. That's what gives you energy."