In Zuilichem, the construction of Henda Flowers' new greenhouse has started. The chrysanthemum grower has purchased a plot of land on which a new greenhouse of about 6 hectares will be built. In week 49, the first cuttings should be set up. 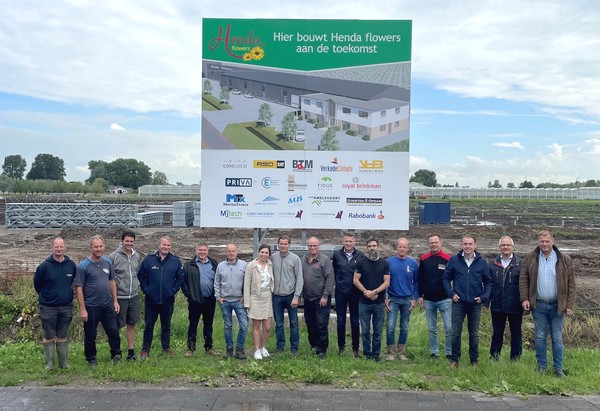 Last week, the construction sign was placed, including an artist's impression of the new building. In the photo (almost), all of the parties are present.

A few months ago, the demolition of two older Chrysanthemum greenhouses on the Uilkerweg in Zuilichem was started. Instead, a new building is required, which will be equipped with LBKs, full LED, insect screens, and fogging, among other things. A modern processing area of 2,750 m2 is also being built, which will be fully equipped with loading docks, offices and a canteen. In addition, the top floor will contain flats for (new) staff. For energy, CHPs will be installed.

The expansion will bring the total area of Henda Flowers to over 9 ha of production. The grower, which is run by Henry and Hilde Satter, is affiliated with Coöperatie Kreling Chrysanten and grows spray chrysanthemums mainly for retail. It is not yet clear exactly what assortment will be grown there.

When asked whether building under the present circumstances - materials and energy are at a premium, inflation is at its highest in living memory - is not a risky undertaking, Satter responds soberly. "I don't expect everything to get cheaper any time soon. Moreover, at the time of the tender, interest rates were low. It is rising now, but we are still ahead of the curve. Fortunately, everyone seems to have their materials in stock, and there is no threat of a serious construction delay."

Energy is a concern in the longer term, but in the short term, the lion's share has been secured, according to the company. As far as labor is concerned, the company hopes to hold on to the few available workers by having its own accommodation, which it says does not skimp on a little privacy and luxury.