Four WUR students were awarded prizes last Friday during the award ceremony of the Thesis Award 2021 of the University Fund Wageningen. Corentin Bisot won in the field of environmental sciences with his thesis on the growth behavior of soil fungi and was honored as the overall winner. According to the jury, Selena Koene, Carolina Sarzana, and Sanne Put wrote the best theses within the domains of life sciences, social sciences and agrotechnology, and food sciences. 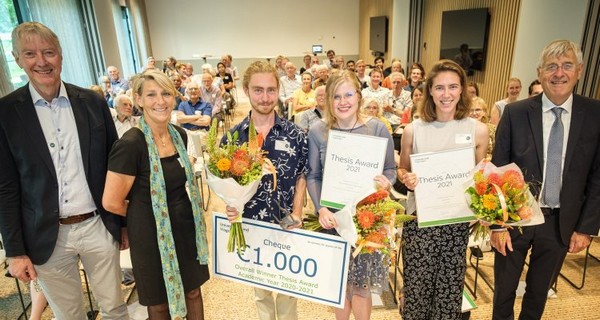 For his master's thesis, Corentin Bisot (MSc Earth and Environment) conducted research into the growth behavior of so-called Arbuscular Mycorrhizal Fungi under various environmental conditions. These soil fungi create large, complex underground networks and form a symbiotic relationship with various plants and trees. They pass on nutrients from the soil to the plant and, in return, receive carbon resources. A well-functioning network can make a positive contribution to the nutrient cycle in agricultural systems, and a better understanding of how these underground networks grow can give us clues on how to stimulate optimal symbiosis.

Growth and branching of fungus
Bisot looked at the effects of temperature and the presence of nutrients in the soil on the way the fungus grows and branches out. He did this by an enormous amount of high-resolution photographs of the growth of the fungus in petri dishes under different conditions, for which he used a recently developed robotic set-up. He then analyzed this data with various algorithms and was able to come to some interesting conclusions about the growth of the fungi. For example, the fungi grow faster at high temperatures, adapt their growth patterns to existing structures, and branch out more when there is an uneven distribution of insoluble nitrogen and phosphorus in the soil.

Bisot not only made use of new techniques and brought to light interesting findings, but he also proved to be a good writer, according to the jury: "His thesis is well-structured, well-illustrated and well-written; basically, it reads like a novel, in which the reader becomes eager to learn how the next hurdles have been taken."

Bisot's findings contribute to the development of a model that can be used in an agronomic context. Before that happens, however, a lot of research still needs to be done on other aspects of the growth of these fungi.

Award ceremony
The award ceremony took place on campus for the first time in two years this year, during a special day for donors, the Friends of the University Fund Wageningen, who financially support the Thesis Award. The winners received their prizes in the presence of dozens of Friends, the jury members, the winners, supervisors and chairholders, and family and friends of the winners. This year's jury chairman was Prof.dr.ir. Francine Govers, Professor of Molecular Phytopathology at Laboratory of Phytopathology of WUR.