Beneficial insects are exposed to insecticides through honeydew

Insects can be exposed to insecticides through various routes, including a plant’s pollen and nectar. For the first time ever, PhD researcher Miguel Calvo Agudo found that honeydew is also a route of exposure to insecticides, which can be harmful to beneficial insects. For these findings, Calvo Agudo will receive the Hugo de Vries Award for the best PhD thesis defended at a Dutch university in 2021 in botany-related sciences.

Honeydew is a sugar-rich liquid that can be found almost everywhere in agricultural lands. It is excreted by various insects, including mealybugs, aphids, and whiteflies. Beneficial insects such as pollinators and biological control agents of pests feed on honeydew when nectar is scarce, which is very common. When feeding on honeydew, they can be exposed to insecticides, Calvo Agudo’s research shows. The effects can be lethal. The beneficial insects studied by Calvo Agudo were especially affected by exposure to thiamethoxam, which belongs to the neonicotinoid group of insecticides. 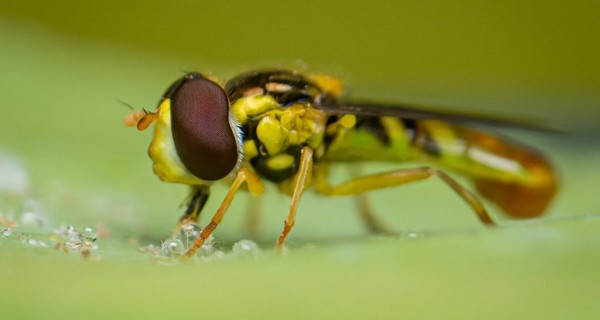 Feeding honeydew
As part of his PhD, Calvo Agudo conducted tests in Spain, the Netherlands, and the United States. He applied insecticides to plants via the soil or through the canopy and collected the honeydew excreted by insects that had been feeding on these plants. He then fed the honeydew to beneficial insects such as parasitic wasps to measure the effects. The mortality among these insects turned out to be very high. Most of the hoverflies, which normally have a lifespan of around 15-20 days, died within three days after feeding on the contaminated honeydew. Half of the parasitic wasps also died within three days.

Afterwards, Calvo Agudo used seeds coated with neonicotinoids, which is the leading delivery method of neonicotinoids in major crops such as soybean, wheat, cotton, and maize. He demonstrated that the honeydew producer survived the chemical treatment and excreted honeydew that contained substantial concentrations of neonicotinoids even one month after the crop was sowed. Consuming this honeydew reduced the longevity of the beneficial insects tested. 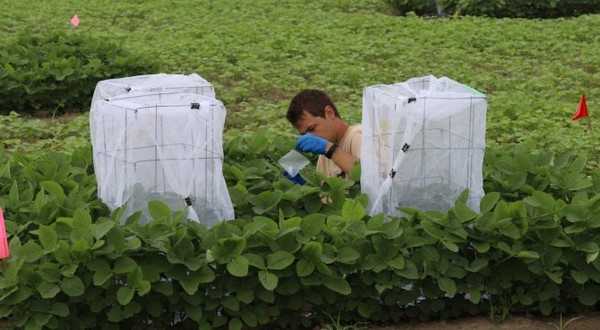 Calvo Agudo’s study is the first of its kind: honeydew had not yet been established as a route of exposure to insecticides. His findings suggest that environmental risk assessments should consider honeydew as an important route. For that reason, he opened his investigation to different research institutes and environmental protection agencies that can evaluate it and compare it with the other ways in which beneficial insects can be exposed to insecticides. He evaluated all the insecticides, pests, and crops relevant to honeydew as a route of exposure. According to Calvo Agudo, his study emphasizes the need for changes in agriculture, which should rely less heavily on pesticides and fertilizers. He also urges citizens to be more concerned: ‘Consumers want to buy perfect fruits and vegetables. But perfect crops come with huge amounts of insecticides.’

Thesis award
Calvo Agudo’s PhD project was supervised by Marcel Dicke, entomologist at Wageningen University & Research, and Alejandro Tena, researcher at the Instituto Valenciano de Investigaciones Agrarias (IVIA). Dicke was impressed by his work: ‘Miguel’s research shows how commonly used systemic insecticides have important side effects on beneficial insects, even when they are used as seed coating. This study again shows the necessity of developing pesticide-free crop methods, for which there are excellent opportunities. The Netherlands and Spain have a good reputation in this regard.’