Understanding nematodes could unlock the potential of your farm

A key to unlocking the potential of a crop is buried in the upper layers of the soil. Living within soil water pockets are worm-like micro-organisms called nematodes (phylum Nematoda). These tiny creatures amass large populations, and in agriculture, they can help or hinder. Some nematodes are plant-parasitic (or PPNs for short), causing over $100 billion in crop damage annually, while others are beneficial, holding enormous potential for sustainable crop protection or helping make nutrients more readily available to plants. 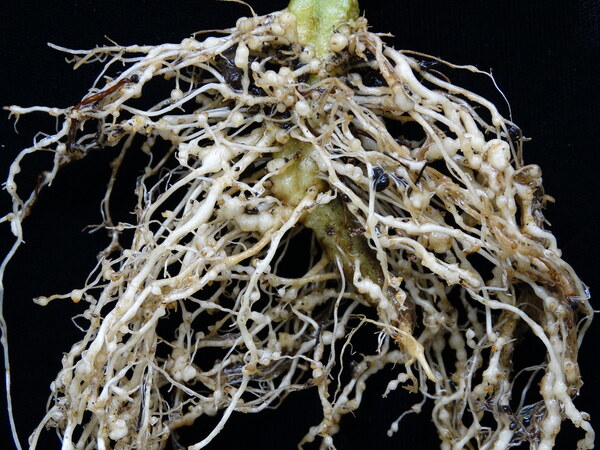 By Cory Smit and Catherine Gacheri
Nematodes are some of the most abundant animals on Earth. Nematology, the study of nematodes, is vast, having identified over 28 thousand species to date, many with feeding habits that are important in agriculture. Fortunately, there are a few fundamentals that farmers can use to simplify and act on the information.

Do nematodes speed up the release of nutrients?
The interplay between bacteria, fungi, and beneficial nematodes that feed on them can contribute to the supply of nitrogen and accelerate the mineralization of untapped organic nutrients. By consuming the bacteria and fungi which break down compost within the soil, these nematodes can speed up the release of nitrogen into the soil by releasing excess nutrients, making it available for crops to use.

Can nematodes be used as Biocontrols?
Dudutech’s research and development of nematodes as biocontrols take advantage of species that kill crop pests, called Entomopathogenic Nematodes (EPNs). EPNs find and kill their target pest to use in their reproductive cycle. Using EPNs helps growers reduce their reliance on chemicals that may unintentionally harm the soil ecology and non-target beneficial micro-organisms.

The ability of infective juveniles to quickly seek out and kill their target before spreading to new hosts makes these beneficial nematodes powerful agricultural tools for the sustainable management of a wide variety of crop pests. In particular, nematodes are widely used in integrated pest management of Thrips.

Due to their complex lifecycles, no single control option can provide satisfactory control of Thrips. If any part of their lifecycle is left unmanaged, the populations can become “residents” and quickly boom, causing significant damage to crops.

How can farmers sustainably manage plant-parasitic nematodes (PPNs)?
PPNs are crop pests, causing lesions, cysts, and rot in the root system. Blue, yellow and red (Toxicity Classes 3 through 1 a and b) chemical nematicides pose numerous problems with far-reaching effects for growers and consumers, including the development of nematicide resistance, exceeding residue limits (MRLs), and negative effects on non-target organisms. These issues have far-reaching effects for farmers as they make pesticide applications more expensive, restrict access to markets and harm beneficial nematodes living alongside pest nematodes.

To help growers sustainably tackle these nematodes, Dudutech has paired MYTECH and NEMguard. MYTECH contains a powerful nematophagous fungus (Paecilomyces lilacinus) which selectively targets plant-parasitic nematodes. Mytech kills all life stages of most plant-parasitic nematodes. The fungal spores on treated crops attach to their target and form mycelia on the host, feeding on it before releasing spores to begin the cycle over.

NEMguard is a powerful, environmentally intelligent nematicide containing plant-sourced ingredients which can be used to control PPNs. The (proprietary) polysulphides contained in NEMguard rapidly cause oxidative stress and kills PPNs. Due to their biology, beneficial nematodes are less affected by NEMguard when compared to routinely used broad spectrum nematicides, which may damage the environment.

The soil beneath crops is a complex but delicate ecosystem. By looking after it sustainably, growers can take advantage of the plant health benefits afforded by healthy soils.