In the Netherlands, the 75th Bloemencorso Flower Parade Rijnsburg will begin on Friday, August 12. That milestone and its UNESCO International Intangible Cultural Heritage designation are cause for a grand celebration under the 'FEAST' theme. For three days, there will be plenty to see. Floats, bandwagons, and cars will boast no fewer than 300,000 flowers and plants arranged in the most beautiful, unusual ways. 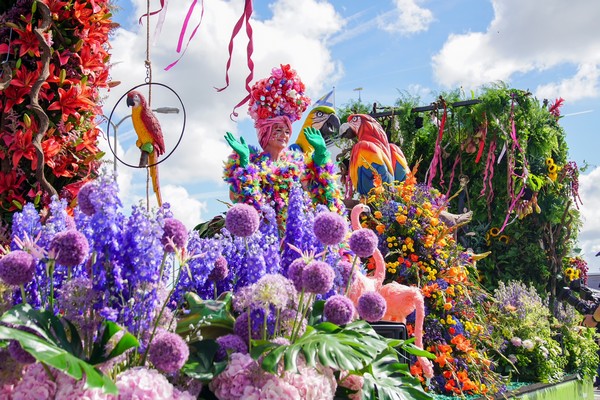 Flower Parade Rijnsburg presented for the 75th time
On Saturday, August 13, this colorful parade will wind through the streets of Rijnsburg, Katwijk, and Noordwijk. It will consist of almost 70 floats, bandwagons, and vehicles decorated with flowers, making this parade one of the most beautiful in the Netherlands. The hundreds of musicians and performers make the Flower Parade Rijnsburg a moving theater production.

The free Flower Parade Show will then kick off at Bloemenveiling Royal FloraHolland in Rijnsburg. Doors will be open to the public at 16:00. This is an atmospheric afternoon and evening with music and lots of flowers. People can leisurely look at and photograph all the floats.

And especially for the kids, three Disney princesses will visit the show between 16:00 and 19:00. The children are asked to dress up as a princess, prince, or pirate - anything their hearts desire.

On Sunday, August 14, the floats can be admired all day on Koningin Wilhelmina Boulevard in Noordwijk. You can find the route and times on www.flowerparaderijnsburg.nl.