From high in the mountains to a tropical island: growers are looking to add extra oxygen to their crops

"We get questions from growers about oxygen from all corners of the world," Gert-Jan Mulder of Industrial Product Solutions reveals on one of the last summer days of this year in the Netherlands. After CEO André van der Stoel called 'oxygen the forgotten ingredient' earlier this summer, growers started checking the oxygen levels in their water anyway. Gert-Jan: "For all growers, we spoke to recently, they saw their suspicions of oxygen deficiency in the water confirmed."

Nature
Traditionally, Industrial Product Solutions has been active with systems for growing leafy vegetables and herbs on water, but since the call this summer, IPS' specialists have also been looking into very different crops. "Growers from lots of other crops recognize that oxygen can also be a welcome addition in their situation, for example, because they grow at altitude, high in the mountains, where the amount of oxygen in the air is already naturally much lower. Then, of course, it is not surprising that there is also less oxygen in the water. However, growers do not always seem to be aware of this, we now find. It confirms what André pointed out this summer: oxygen is a forgotten ingredient."

Stimulating growth
Gert-Jan, André, and the rest of the team at IPS saw problems with brown roots in pepper and tomato cultivation, as well as in blueberry cultivation. The cause, it turned out after measurement in both cases, was lack of oxygen in the water. Tulip scalders and cannabis growers, among others, also digitally reported to the water-based cultivation specialists in 's-Gravendeel. "By no means always with very big problems, because growers are always looking for that few percent extra growth, that increase in production, bigger plants or two centimeters longer stems. Growers ultimately always want to stimulate growth. And oxygen is crucial to that."

Why this is so, André explains below. Water management in greenhouses is an aspect of cultivation that needs to be utterly monitored and adjusted. Think of the pH, the EC, the amount of algae, fungi, diseases, etc. But one factor that is at least as important as those is often forgotten, observes he and his team from Industrial Product Solutions: Dissolved oxygen.

Biological importance of oxygen
Plants need oxygen for their growth. The oxygen is absorbed by the roots in its dissolved form. Oxygen is important for the active uptake of essential nutrients like nitrogen, phosphate, and potassium, but also for the build-up of proteins and dry matter production. A lack of oxygen in irrigation water causes serious growth problems, as André knows. Dissolved oxygen is also important for substrate quality. "High dissolved oxygen concentrations cause a competitive increase in soil life, to the disadvantage of pathogens. The amount of dissolved oxygen also regulates the production of substances that suppress diseases and pests." 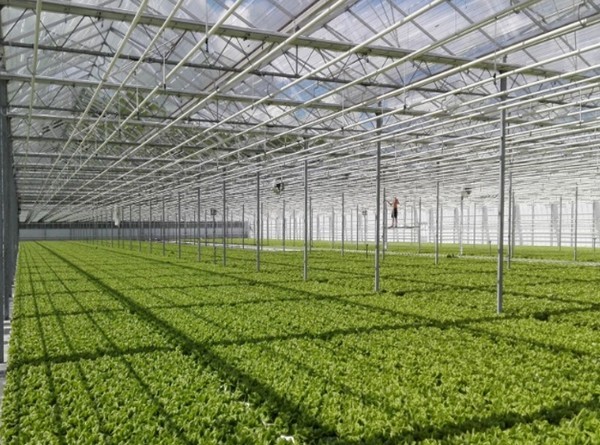 IPS installed an oxygen injection unit in a greenhouse that cultivates on a hydroponic system, for example

This system takes into account the needs of the plant, dissolved oxygen, and no air bubbles. IPS received the request from various customers who had problems with oxygen deficiency.

André explains: "The need of plant and substrate for dissolved oxygen is not new. Research has already amply demonstrated the role dissolved oxygen plays in various mechanisms in the plant. Strangely enough, both the supplying sector and the growers do not seem to be aware of the importance of sufficient dissolved oxygen in the irrigation water."

In practice, the entire water composition is checked and adjusted, except for the oxygen concentration, notes the CEO. "We could quite easily relate the growth problems in the (hydroponic) cultivation systems among our customers to the low oxygen content in the water. The development and installation of the oxygen injection unit solved the problems for our customers and resulted in a significant increase in growth and quality of the crop."

In the summer, the absorption of oxygen by the plant is the highest due to the strong growth during this period, continues André. "However, the oxygen capacity of water decreases as its temperature increases. Oxygen can enter the water through diffusion from the atmosphere. However, the contact surface of irrigation water (in storage tanks) with the atmosphere is often comparatively too low. Or there is no contact at all because the tank is sealed. Also, the time in which diffusion can take place is often too short for the amount of water. We recommend adherence to the physical maximum dissolved oxygen concentration of 8.5 ppm for water with a temperature of 25℃."

In practice, however, Industrial Product Solutions often measures concentrations between 3 and 5 ppm at growers' premises. "You don't want bacteria in your crop, and yet this water is the first to be used for watering? There is no doubt that plants suffer a lot at these kinds of concentrations. This does make the necessity of adding dissolved oxygen to the water crystal clear," he clarifies. "Our experience has shown that our dissolved oxygen injection unit can save a lot of growers problems with the growth of their crop."

Oxygen injection unit
IPS has completely renewed its patented oxygen injection unit. Now the right solution can be offered for every situation and oxygen requirement. IPS' unit can increase the oxygen concentration of the irrigation water up to 3 to 4 times the physical oxygen uptake capacity of the water without using much energy. "Through an intelligent method where oxygen is mixed with water, the water absorbs the oxygen quickly and efficiently without charging the water, and the plant roots are not affected. This is in contrast to bubble generators."

The desired oxygen concentration can be easily adjusted by the grower, and the unit can be installed in line with other water systems or stand alone. The unit is available in different sizes and versions, depending on the greenhouse's water requirements. According to André, this ensures that the unit can be used in many different growing systems, such as ebb and flow systems, outdoor cultivation, pot cultivation, vertical farming, and various hydroponics systems, both NFT and DFT.

Gert-Jan adds. "Thanks to all the applications from many different crops, we are going to learn a lot of new things together with growers in the coming period. With the tests with our systems, we are building evidence about our stance." At IPS, they are already seeing the first improvements and positive results from the tests at growers worldwide. "For concrete yield figures, it is too early now, but as soon as we have these, we will definitely communicate them towards the market."