To get good control of whitefly in Poinsettia crops, including the resistant Bemisia biotype, Biobest IPM, and Pollination Specialist Koen Merkus explains the importance of keeping the population level below a ‘tipping point’ by late October and how to do it. 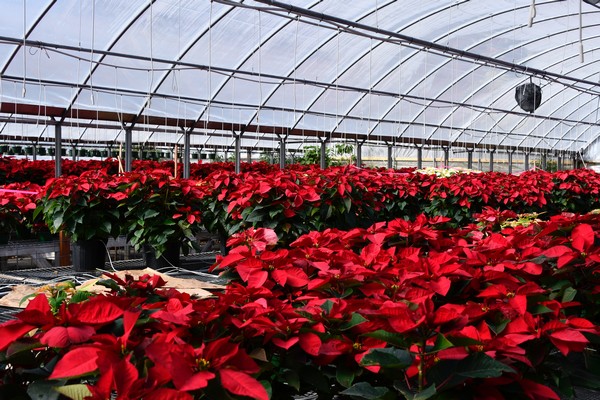 Two Bemisia biotypes
“Within the Bemisia population, there are two biotypes – Bemisia MEAM1 (formerly known as B type) and Bemisia MED (formerly known as Q type),” explains Koen. “The latter is more resistant to chemical insecticides but, on the plus side, finds it more difficult to find a mate and reproduce.”

“So, in the circumstances without high insecticide pressure, Bemisia Q biotype is out populated by Bemisia B biotype. However, frequent applications of chemical insecticides can exert a selective effect, favoring the resistant biotype. If at an early stage in the crop, this can lead to significant problems later on.”

If Bemisia is present in a Poinsettia crop, Koen says it is safe to assume both biotypes will be found. “It is impossible to tell them apart visually – they can only be identified through molecular analysis,” he says.

Tipping point
He goes on to explain there is a tipping point. “By the end of October, growers should aim for an infestation level below 20% - i.e., fewer than one per five plants. A higher population level is likely to cause issues down the line, and subsequent chemical sprays will favor the Q biotype. Therefore, a preventative approach is crucial.”

Start clean
To keep glasshouse and tobacco whitefly populations in check, Koen stresses the importance of starting the Poinsettia crop clean and remaining extremely vigilant. This begins by inspecting cuttings carefully on arrival from the propagator.

“Having sticky traps in place before the cuttings arrive means monitoring starts immediately,” he says. “If whitefly is present, it will often be found quickly.”

“Careful scouting is vital – ideally, pick up random cuttings and inspect the underside of the leaves.”

“If the pest is detected at this early stage, it’s prudent to spray. If the initial whitefly population is high early on, growers end up playing ‘catch up’ with their control strategies throughout the production cycle. Taking action early saves a whole lot of trouble later. As the plants are still small, better spray coverage can be achieved at this stage.”

Before sticking the cuttings, he recommends dipping them in Preferal WG - a biological insecticide for whitefly control.

Pot spacing
“A week before the stuck cuttings are spaced, introduce Amblyseius swirskii mites (Swirskii-System) and supplementary feed with Nutrimite™,” he advises. “With the pots closely spaced, the mites can move around easily and are less likely to be lost.”

At the point the pots are spaced, Koen recommends starting weekly introductions of Eretmix-System containing a combination of two parasitoids; Encarsia formosa (Encarsia-System) for controlling glasshouse whitefly and Eretmocerus eremicus (Eretmocerus-System) to target Bemisia. In addition, he says it may be necessary to introduce further Swirskii-System supported by Nutrimite™.

“We strongly recommend using both products,” says Koen. “The swirskii targets the first instar of the whitefly, while the parasitoids target the second to fourth instar. This minimizes any potential intraguild competition between beneficials.”

Summing up, Koen says, “the key is to monitor and scout closely to start the crop clean and, if possible, to review last season’s scouting data. Then employ a full IPM strategy - involving parasitoids, a predatory mite, and bioinsecticides to keep the Bemisia population below the 20% tipping point. Be aware that whitefly pressure may also differ per variety.”