Two of the main pests threatening protected crops can be controlled with a new insecticide from Syngenta Ornamentals. Mainspring was launched today at Syngenta’s Jealott’s Hill research site, adding a vital new tool to a grower’s armory.

The new broad-spectrum insecticide has proven effective against both caterpillars and thrips, which are both capable of inflicting a huge amount of damage to crops.

Mainspring’s active ingredient, cyantraniliprole, has a mode of action that is unique among plant protection products for ornamentals and is designed to work quickly and thoroughly. 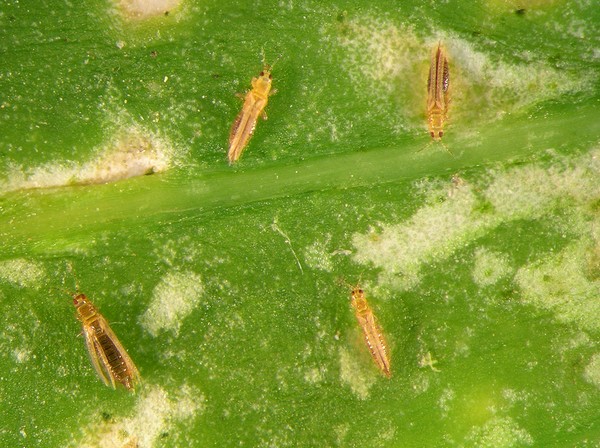 “As well as offering rapid control of crop damage and a welcome wide spectrum of activity, the unique mode of action is particularly useful when it comes to resistance management,” says Syngenta Ornamentals technical manager Sean Loakes.

The beet armyworm and golden twin-spot moth both have the capacity to damage plants in greenhouses to the point that they’re unmarketable.

Increasing at high speed
“Caterpillars are capable of feeding and increasing their populations at an alarming speed and are incredibly difficult to control,” adds Mr. Loakes.

“Tell-tale holes in leaves are a trademark, as is discoloration on the foliage or petals, severed stems, and leaves or wilting.” Thrips have been causing significant damage to protected ornamentals since they first arrived in the UK in the 1980s.

“They are able to reproduce, and therefore spread, incredibly quickly. Under protection in the summer, it can take just 11 days for a new generation to complete its life cycle once the eggs have hatched,” Mr. Loakes explains.

“Mainspring’s a powerful tool for dealing with resistant populations, as it’s a new mode of action to anything that’s been available to ornamentals growers before.”

Mainspring has been formulated for spray application specifically for use on container-grown protected ornamentals.

Once ingested, cyantraniliprole targets a specific receptor in an insect’s muscles, resulting in paralysis. Feeding stops within two hours of the crop being sprayed, preventing the pest from inflicting any further plant damage.

After application, cyantraniliprole is readily absorbed into the leaf’s waxy cuticle and passes into the leaf tissue. This translaminar activity means it encounters insects feeding on the underside of the leaf, where it’s typically harder for sprays to target.

Larvae
There is also some effect on new larvae as they begin to emerge from eggs laid on the leaf surface. “Laboratory tests indicate that this is because the active ingredient is adsorbed by the shell of the egg, which the larvae ingest as they start to chew their way out and so die without fully emerging,” says Mr. Loakes.

Pests are killed by starvation within two to seven days, depending on temperatures. “When conditions are warm and thrips are more active, it will most likely take two days,” Mr. Loakes adds. “Mortality can be slower than with some older control products, but the important thing is the speed with which feeding damage is stopped.”

Mainspring will fit well into integrated pest management programs because trials have demonstrated that it doesn’t significantly disrupt predator or parasitoid populations.

Mainspring is suitable for use with container and substrate-grown ornamentals under protection, including bedding plants, pot plants, cut flowers, and nursery stock, where the glasshouse or polytunnel floor is concrete or fully covered in some other way that prevents the product from reaching the soil underneath.

Its rapidly dissolving granular formulation has been designed both for ease of use and for operator and crop safety. One of the label requirements for applications against WFT is to use Mainspring in a tank mixture with 125ml sugar solution per 100 liters.

“Sugar is attractive to the thrips and stimulates them to leave their hiding spots and feed, thus coming into contact with the product,” says Mr. Loakes.