The summer of 2022 started off with a hopeful celebration at our Conservation Nursery on Kauai as three different critically endangered plant taxa collected by the Mamba drone arm set roots from cuttings – laukahi (Plantago princeps var. anomala), akoko (Euphorbia eleanoriae), and Lysimachia iniki.

Our scientists and Outreach Robotics developed a robotic drone arm called Mamba to collect rare plants from otherwise inaccessible places. Mamba also allows for a much faster retrieval time. What used to take hours of hiking and rappelling to collect plant material now takes minutes with the Mamba. This result is fresher plant material arriving at our Conservation Nursery and an increase in the likelihood of successful propagation. 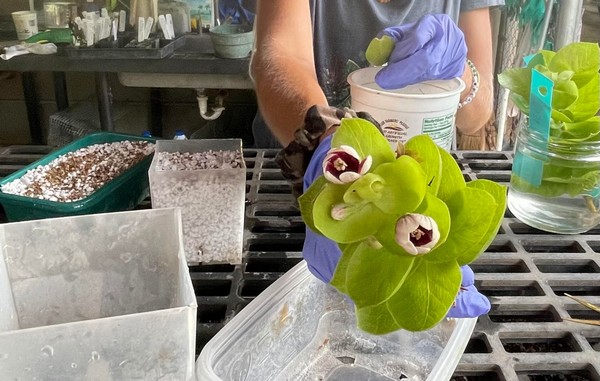 Think of it like rescuing an imperiled person from a remote spot. If you hike to reach the person and carry them to safety on a stretcher, the chance that they are under additional stress is much higher than quickly airlifting them. The sooner we can get the patient (plant) back to the emergency room (our Conservation Nursery), the greater chance of survival.

While attempting to set roots from cuttings in both Lysimachia iniki and akoko has occurred before, it was the first known attempt to do so with laukahi due to its rarity. That all three sprouted roots are an inspiring accomplishment for the Mamba field collection and nursery teams, providing further proof of how new technology can advance rare plant conservation.

Laukahi (Plantago princeps var. anomala)
Laukahi (Plantago princeps var. anomala) is a small erect or ascending woody shrub that grows on steep slopes and cliffs in wet forests in the Upper Hanapepe and Kalalau valleys on the Hawaiian island of Kauai. Curiously, laukahi is one of more than 250 species in the genus Plantago, largely temperate in distribution but also occurring at high altitudes in tropical areas and on oceanic islands like Hawaii. While some consider Plantago species like Plantago major to be invasive or ‘weedy,’ Kauai’s Plantago princeps is Critically Endangered, with less than 50 individuals known to occur in the wild. 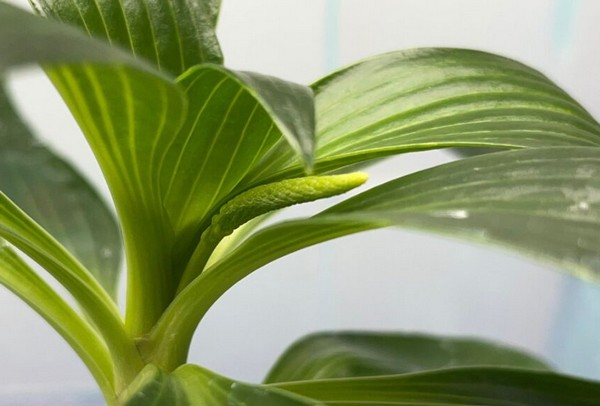 Further field collection trips with Mamba could have a big impact on the future of critically endangered plants like laukahi. The original cutting is doing well at the nursery and even recently developed a flower stem. A flower means seeds, and seeds mean increased hope for future restoration in the plant’s natural habitat.

Lysimachia iniki
Past samples of Lysimachia iniki brought to the Conservation Nursery were fragments of plants that had fallen from the sheer cliffs below Kauai’s summit after storms. Incidentally, this is how the species got its name. Lysimachia iniki‘s discovery occurred after Hurricane Iniki’s devastating winds dislodged the native plant from its steep habitat. No past plant fragments brought back to our nursery had ever survived. That is until now.

Two Lysimachia iniki propagules are thriving under the care of our staff in the Conservation Nursery. There is only one known population of Lysimachia iniki, underlining the importance of this major breakthrough in the conservation of this Critically Endangered Kauai endemic plant. 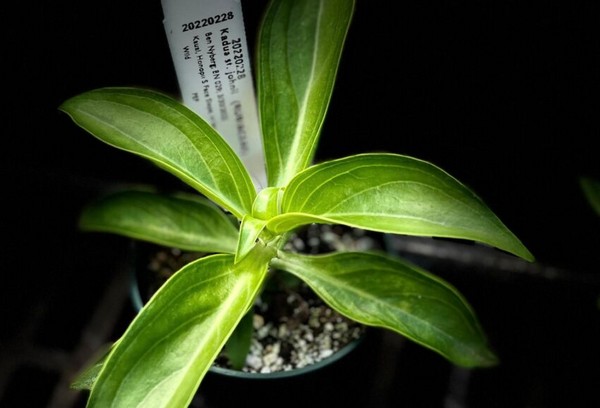 Additional success for rare plants
The Mamba has brought additional success beyond laukahi and Lysimachia iniki. A rare Rubiaceae, Kadua st-johnii, grew from a seed collected off of a cutting, and a less rare Lysimachia hillebrandii also took root. Lysimachia, a member of the Primrose family, is often difficult to grow from cuttings. The successful rooting of Lysimachia hillebrandii in our Conservation Nursery reinforces that the speed with which Mamba retrieves plant material directly affects survivorship in the nursery.

There have been some setbacks. Akoko (Euphorbia eleanoriae) survived for four months after setting roots. While this specimen did not make it to maturity, it is the first time the species set roots in cultivation. The team at the Conservation Nursery plans to build on the knowledge gained from the first attempt to try again with future field collections.

Ultimately, the Mamba allows us to reach rare plants that are otherwise unreachable. For some of these cliff-dwelling species or any plants that grow in hard-to-reach areas, these developments in drone technology may be the best hope for their continued survival. “The use of drones also allows a fast turnaround for processing cuttings and placing them in our mist-house or in a temperature-controlled location for protection,” says NTBG Nursery Manager Rhian Campbell. “As we continue to develop protocols for the handling of these cuttings and learn everything we can about propagating these extremely rare species, we are also likely to become more successful with them over time.”