Negative gas price remains out of reach of grower

It was only for an hour, but the gas price really did go negative on Monday. A unique situation that raises questions, even in greenhouse horticulture, according to a tour of energy specialists. After all, who doesn't want to be paid to buy gas?

An important condition to benefit from a negative gas price is to have insight into when exactly that gas price is negative. From the roundup, it appears that we were not the only ones who initially missed the hour for a while on Monday. When asked, Gerard van Antwerpen of NIFE Energieadvies frankly admits to having missed the moment as well as not knowing exactly what the hourly prices are. "About ten years ago, I know that there was talk of an hourly gas price. At that time, there was talk of an hourly market for gas in the same way as there is an hourly market for electricity nowadays, but as far as I know, this was not introduced for horticulture."

Daily gas price
We also put the question about this negative gas price to John Kruijt of Enova. "Oh, that hour, I saw it pass by," he responds. He then quickly helps us out of the dream. The negative hourly gas price that briefly existed remains out of reach for greenhouse horticulture. "Gas trading by the hour is not possible with horticulture companies. The smallest unit a grower can achieve is a one-day price. For that, you have the daily market." Here, too, the gas price has dropped significantly recently, John points out. He looks up the current price on Tuesday afternoon. "27.6 cents is the daily gas price today. With that, the price is already almost back to a normal level of around 20 cents."

Understanding prices
Two months ago, the daily gas price was still much higher, around 3 euros. Meanwhile, due to well-stocked gas storage facilities as well as mild autumn weather, the gas price is falling significantly. On the TTF market, the various short- and longer-term prices, which are publicly available, also show this. However, the daily gas price, which also fell sharply, is not visible to everyone. John explains that growers do have insight into the price through their energy suppliers. Taking out a subscription to get insight is also possible, he knows. "Among others, The London Energy Brokers' Association (LEBA) offers that - for from memory - about six thousand euros a year, so a lot of people leave that out of their minds. There is also Heren, but this is only accessible through energy companies."

Gas consumption per hour
Gerard points out that there are 'hourly metered customers' in horticulture. These are companies that are charged on the hourly peak or use more than one million cubic meters of natural gas per year. "They have had to have a control signal installed so that the supplier is able to monitor gas consumption. The customer has had to pay for this." John points out that 'large connections' are required to be 'hourly metered.' Gerard wonders on Tuesday afternoon who has currently benefited from the negative gas price. "Growers apparently did not, even though they pay for a control signal," he says.

Speaking to BNR, economist Edin Mujagic of OHV Asset Management calls the hour with the negative gas price "short, but incredibly fun." As an explanation, he gives full gas storage and sufficient supplies by pipeline from Norway and by ship. Because stocks are full, he says, traders are paid to take gas anyway. However, this does not mean "that all of a sudden we are all getting money handed to us because the price was negative for a moment." 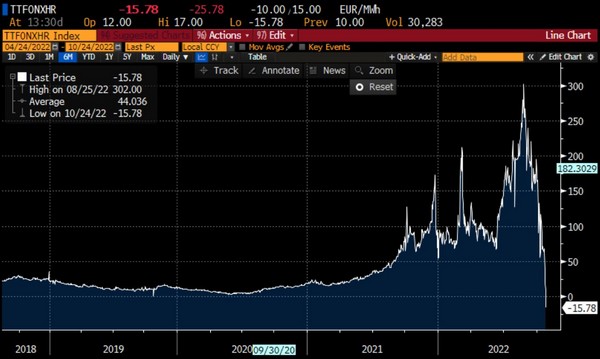 Unused gas sold at daily gas price
The question is, even if horticulturalists cannot benefit from a short-term negative gas price, how should they now trade in the market where prices are falling? John points out that having a trading contract is a key requirement for growers to benefit from low daily gas prices. "They can choose how to commit their gas, sometimes years ahead. Those who commit gas years ahead actually buy the same quantity for each day in the contract period, with the choice of what to do with it on the day itself. Not using it is then an option. The gas that is not used is sold on the daily gas market. Recently, prices here were very high."

Selling electricity
When gas prices are high, often electricity prices are also high. "A grower with a CHP can also choose to use gas to make electricity and, provided the electricity has not already been pre-sold, supply it back at high day gas prices." According to the energy specialist, smaller greenhouse farms often work with contracts in which the price is fixed throughout the year. This gives them security but also makes it impossible to respond smartly to the daily gas price.

Declining trend
Those companies that do have the option to respond to daily energy developments are almost short of eyes and ears to monitor all developments in the runaway energy market. Energy advisory companies support growers in this regard. The negative hourly price, even if the grower can do nothing with it in concrete terms, does indicate something about what is happening in the market. However, the daily gas price is more interesting to keep an eye on. John: "The gas price is falling, that's the trend." He sees that it is an option for growers to 'do nothing for a while,' and with low day gas prices, take advantage of that. "As long as prices are falling, it is a consideration to wait to take forward positions. Currently, the 2027 price is already below 40 cents. Thus, over the next few years, it may also drop to the point where growing becomes an option again, even if there is no power sale versus making heat with a CHP."

Buffering?
One question is whether growers are wise to take advantage of cheaper day gas by burning it, even though it is warmer outside, and buffering the heat. After all, in a similar way, a grower could theoretically have benefited from the negative hourly gas price. John points out the limits here. "The buffer at growers fills up quite quickly. There is usually the only capacity to store heat for a few days. Moreover, you can't store heat indefinitely without heat loss either."