Tray manufacturer HerkuPlast is celebrating a special anniversary this year. For 50 years, cuttings and seed trays have been produced in the picturesque Bavarian village of "Ering am Inn" for the international horticulture and forestry market.

Ideally, the company would have celebrated this milestone with customers during IPM Essen 2022, but Covid-19 still put a stop to that.

The company is headed by director owner Jürgen Kubern. From the early beginnings in the 70s and 80s, the company has experienced solid growth from the 90s, partly thanks to the hard work of Alfred Boot. He is celebrating his 25 years of service at HerkuPlast this year. He joined the company in 1997 as an export manager. For the previous ten years, Alfred had worked as the importer of HerkuPlast trays in the Netherlands, so his connection with the company dates back 35 years. 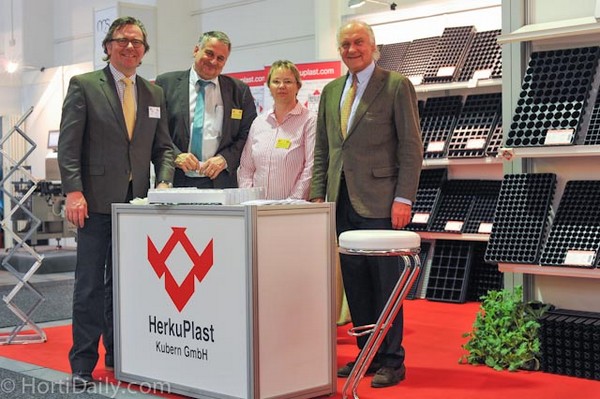 Recent developments
Much has happened in the past decades, says Alfred Boot. Whereas in the past, the company only made the QuickPot multi-use trays, they also started making thin trays in the 1990s.

"I joined HerkuPlast, and it soon became clear to me that, coming from the Netherlands, we also needed a series of thin trays. The Netherlands is a country that exports many young plants in trays. We energetically started developing that program, and it has grown from 23 trays in 1997 to a package of more than 400 trays of various types and qualities. From the well-known QuickPot multi-use trays to the thin series called HerkuPak."

The horticultural industry is developing rapidly. New markets like vertical farming, or the many opportunities that lie ahead in export countries, and HerkuPlast is responding to that. The company supplies all trays made of recycled material and ensures that, if possible, trays are retrieved after use and reprocessed. Like many in the industry, HerkuPlast faces challenges beyond its control; rising energy and material prices, shortages of personnel and materials, and challenges in international transportation.

Alfred Boot: "We deal with those issues every day. For example, we have had a difficult time behind us when raw materials were very scarce, and some suppliers had to deal with months of delivery times. HerkuPlast ensured that all customers could be supplied within the normal short delivery times. A feat Alfred Boot now knows when he looks back on the past year.

'We ensured, sometimes at great expense, that no one ran out of trays. That has earned us a lot of goodwill. Our industry is a structural sector that, despite the challenges mentioned, will always exist. And with the new demands that the future will place on us, I look forward with confidence to many more great years.'