Marcel Boonekamp, director of growing at the eminent Green Circle Growers (GCG) in Oberlin, Ohio, United States, last year asked Plant Empowerment to introduce his orchid team to the Plant Empowerment philosophy. Therefore, Plant Empowerment developed an implementation project that is seeing GCG’s orchid team tune into monthly online interactive meetings, exploring different topics. Marcel notes that, so far, the online sessions have been helping him and his growers to better understand the unusual needs of the quirky orchid crop and, therefore, “why we are doing the things we do.”

Data-driven growing
Marcel reveals that GCG began growing orchids some 15 years ago. As the award-winning company continues to delight consumers with its colorful orchid varieties, the crop’s popularity has led to the thriving firm’s orchid production being scaled up as part of its large-scale expansion project. “We have 35 acres of orchids now and are constantly looking at how we can optimize the utilization of our space to produce more,” asserts Marcel.

GCG has always been at the forefront of sustainability and technology, and, with that in mind, each of its indoor growing areas is managed using the latest plant management software and automation technologies to constantly track growing data and maximize yields. 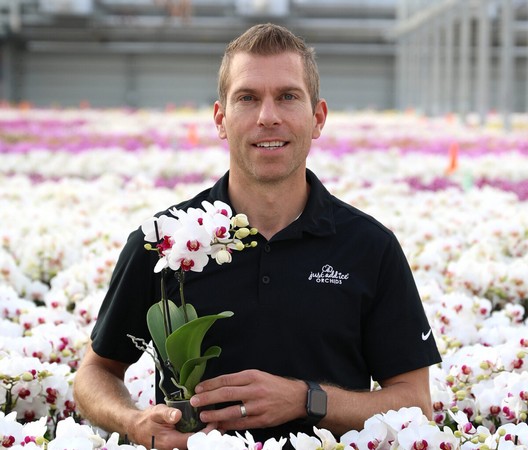 Boonekamp has therefore been working with LetsGrow.com since he joined the Ohio-based company seven years ago. LetsGrow.com, one of the implementation partners of Plant Empowerment, provides a data platform on which multiple types of greenhouse information – including climate, root zone, labor, pests, and diseases – from different data sources, such as climate control and sensor systems, can be stored and visualized.

Boonekamp says: “LetsGrow.com has helped us with many aspects of our growing, including customizing our climate reports to make them more user-friendly for our growers to read and introducing us to different tools, such as an online excursion tool that we use for our weekly crop walks to check on the plant’s health.”

Some two years ago – and as part of GCG’s aim to constantly improve its growing techniques, Boonekamp began to set up key performance indicators (KPIs) for variables (such as radiation, humidity, and CO2 levels) that play an important role in the plant’s growth cycle.

LetsGrow.com, therefore, helped Boonekamp set up a system whereby growers are alerted if one of the variables is out of range, perhaps because the lights are not working properly, for example. “We can score and measure how things are going,” he notes.

Discovering Plant Empowerment
Whilst working with LetsGrow.com, Boonekamp fortuitously learned about Plant Empowerment. Therefore, he and his team last year tuned into Plant Empowerment’s international, open webinars that introduced the GCG orchid team to the Plant Empowerment philosophy and community. They discussed topics such as light use efficiency (LUE) and data-driven growing.

He says: “The open webinars we did last year were really nice. The sessions helped my team realize just how much GCG has invested in greenhouse equipment. For example, we’ve invested in wireless sensors, outside curtains, and fogging for humidity control. And the newest greenhouses have Airmix (to control the air ventilation).”

“But the webinars largely focused on vegetable (salad) crops. We were really interested to learn more, but at the same time, certain things didn’t apply to us. I think the challenge for Plant Empowerment is that they know a lot about vegetables and cut flowers. Orchids is a newer crop anyway, and it’s different from the rest.”

Understanding orchids
Boonekamp highlights that phalaenopsis orchid species do not require a specific photoperiod to induce flowering. Rather, the flowering process is triggered by a period of low temperatures.

He explains: “The most difficult part about growing orchids is that the climate ranges are very tight – especially the temperature and light levels. In growing them, you always have two phases – the growing phase and the cooling phase. The growing phase is always 28°C during the day, and at night, you cannot go below 27°C because you might get spikes in a phase where you don’t want spikes yet.”

He adds: “So once an orchid plant is big enough, we can put it into cooling (19°C). This triggers the plant’s spikes. So that’s the nice thing about orchids, you can really plan for their production. So, 18-19 weeks after you put them into cooling, you know that you can ship that plant.”

Another interesting point is that most horticulture crops – such as tomatoes – are C3 plants, which means that they open their stomata (the pores that take in carbon dioxide and release oxygen) during the day to evaporate and cool themselves.

“It’s a very smart system, but it’s not efficient because it requires more energy to do this. So, that’s why the phalaenopsis is in slow growth – not just because it’s a shade plant, it’s just that it’s not as energy efficient as C3 plants.”

Boonekamp reveals that the online sessions have so far been helping him and his team to better understand the physiology of the orchid plant and, therefore, “why are we doing the things we do.”

So far, the GCG orchid-growing team has enjoyed an introduction to Plant Empowerment: the basic principles book. “In part, it feels like going back to school, but at the same time, it’s easy to read. I liked the format,” says Boonekamp.

The growers have also taken part in a session on orchids’ assimilate balance, namely, finding the right balance between sugars created and sugars consumed to produce a healthier and more resilient crop.

“So, we’ve really been going back to the basics – what are the three key elements (energy, water, and assimilates) doing? How do they interact together? What happens inside the plants? What happens with cells when it gets too warm? Or what does a plant do to protect itself? We’ve been looking at those mechanisms first, and then we translate them to our situation.”

He adds: “It’s great to see that the growers are feeling comfortable in that setting to really ask questions or even challenge the people from Plant Empowerment. And while the session is taking place, we go on our phones to the Plant Empowerment website and answer questions, so it’s interactive. The growers are not just sitting there listening.”

Training the team
Boonekamp, the son of a grower, concludes: “There’s a lot of horticultural knowledge that’s been around for generations, but we’ve never really been able to explain why the plant behaves how it does, or why certain growing techniques work better than others. And I sometimes recognize pieces of advice and realize that’s what my dad used to say. But he couldn’t explain why. It’s just the feeling.”

He adds: “You don’t often find growers here in the US that has grown up in the horticulture business, as I did. So, there’s a big learning curve. And when it comes to growing plants, there’s always more to learn. But since generating more data and working with Plant Empowerment, it’s been easier to explain to the team the reasoning behind our growing techniques and, subsequently, help better train our people here.”