Anne-Sietske Brinks, the Deputy Head of Mission of the Kingdom of the Netherlands together with a member of the City Council of Belgrade, Ms. Ruzica Belanovic, planted a new variety of tulips, named after the Serbian architect Jelisaveta Nacci. Ms. Belanovic pointed out that the City of Belgrade was very grateful to the Embassy of the Netherlands for the donation and was highly appreciative of the gesture, given that the new tulip variety is named “Jelisaveta” after the first Serbian woman architect. 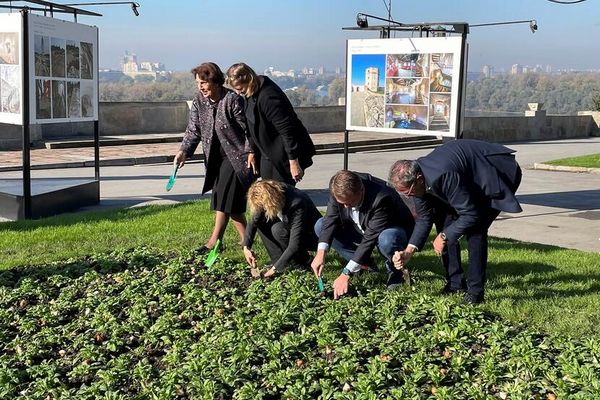 The planting of 20 thousand tulips at the iconic fortress of Belgrade by city officials and representatives of the Dutch Embassy in Belgrade. Photo by ©Mila Mirkovic

“The new tulip variety will be seen in spring and the residents of the capital city, as well as tourists who visit Belgrade, especially Kalemegdan fortress, a symbol of the capital city, will enjoy its beautiful petals. With gratitude to the Embassy, we hope to continue the good cooperation that we’ve had so far,” Belanovic pointed out.

Ms. Brinks emphasized that a total of 20 thousand bulbs had been donated to the city of Belgrade. “That is a symbol of our joint participation in the “Green Cities” project. The Government of the Republic of Serbia aims to have 25% of urban areas covered in greenery by 2025.  e  public-private partnership project “Green Cities Serbia”  is trying to help Serbia achieve this goal. We want the Jelisaveta tulip to be a symbol of our cooperation and for Serbia to achieitseir ambitious goals,” Ms. Brinks highlighted. Jos Beelen from the company JUB Holland who provided the tulip bulbs explained that it takes 20 years to bring a new variety to the market. As he noted, this is a variety that is characterized by a multitude of colors and that is suitable for planting in both public green areas and home conditions.