Two hours in an afternoon were enough to discuss a lot of new interesting insights from sensor data. Some 50 budding horticultural specialists were present. MBO Westland and Sendot jointly organized a Masterclass Plant Insights last week. The venue was the World Horti Center in Naaldwijk, Netherlands.

Bert van Tol, former director of the Delft Research Group, of which Sendot was also part, kicked off the masterclass on 12 January with a piece of history. A sound of recognition rose from the room at the sound of making an ISDN connection (yes, the internet was not as easy 20 years ago as it is today).

New sensors
Bert discussed developments in areas such as technology in greenhouse horticulture. Sendot was founded seven years ago to contribute to this with sensors. It already resulted in sensors to measure photosynthesis and oxygen, and it doesn't stop there. "We are also working, together with Normec Groen Agro Control, on the development of a sensor to measure viruses in real-time," he says.

There are already many sensors on the market. Arie Draaijer, a technical manager and senior researcher at Sendot, estimates that there are already around 50 sensors that can all measure different things in and around the greenhouse. "And there will be many more," he predicts. "We also want to start marketing sensors to measure pH, CO2, and leaf temperature, among other things."

He drew the comparison with a Formula 1 car. "There are about two hundred sensors on and in that alone." Car racing is a top sport as far as Arie is concerned, and so is growing in the greenhouse. "Growers can, with the help of their green fingers as well as data, steer the plant in such a way that it too can deliver top performance."

Learning to read graphs
In the room, in addition to active growers, were possibly future growers. After all, cooperation had been sought with Lentiz MBO Westland for the event on 12 January. "We explicitly want to connect with practice as well," said training coordinator Roel van Heijningen in his presentation.

Both the students, the growers, and other interested parties were presented with a series of graphs during the afternoon, which, in addition to Arie, were also covered by Bonte de Jong of Phytoconsult and Robert Zuyderwijk of B+H Solutions. Arie especially dwelt on what can be discovered additionally by measuring photosynthesis efficiency. "With that, you measure the plant's engine. It also says something about the production of a plant."

In the graphs Arie showed, one of the things that stood out was that plants do not deal equally efficient with the light they receive during the day every night. After a day with too much light, the plant needed recovery time, which comes at the expense of growth. 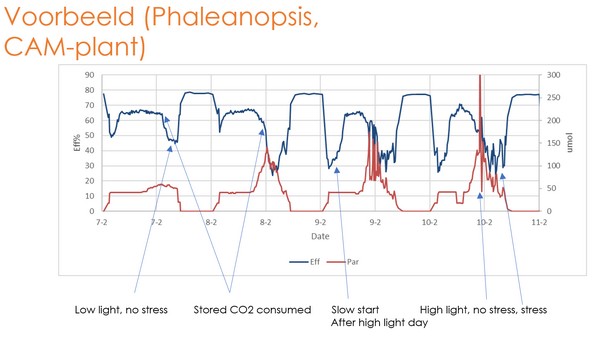 Not always lighting
As an example, Arie discussed Phalaenopsis with Bonte, a consultant specializing in potted plants (including orchids). This is a CAM plant, an abbreviation for Crassulacean Acid Metabolism. CAM plants, including many other ornamental plants besides orchids, close their stomata during the day to grow without drying out. With stomata closed, they cannot absorb CO2. With the CO2 they absorb at night, they also grow during the day. But when the stored CO2 supply runs out, it stops. Additional lighting is, therefore, pointless. The figures in the graphs shown also made that clear. The technical term 'malate dip' was mentioned. In that dip, the stored CO2 runs out.

Bonte explained that in practice, together with growers and with the help of sensors, he came to the conclusion that it may be necessary to start lighting later at night. If growers do it earlier, but the malate pot is still empty, the plant can't actually do anything with the light. Moreover, the light that the grower gives the plant at night may cause the plant not to be able to use all the natural light (which doesn't cost any extra energy) later during the day, but instead damage the plant.

Another lesson is that it can pay off not to turn artificial light on all at once but to switch it up gradually. With dimmable LED luminaires, this is possible these days. This prevents growers from stressing the plant and allows the plant to quickly maximize light. "This makes it possible to ultimately create more net assimilation with a lower PAR sum."

It raised the question from the audience whether there are already sensors that make it possible to see the status of the malate pot in advance. Arie hesitated but did indicate that a lesson could possibly be learned from night efficiency combined with knowledge about the malate pot. 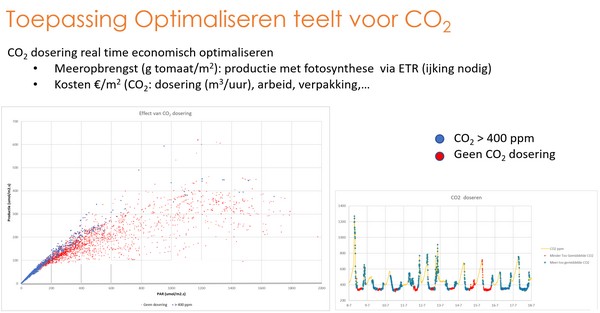 What does the deployment of silver spheres do to a crop?
After a series of graphs, John van Helden of Yookr had the chance to introduce his company. Yookr provides sensors and a dashboard to clearly display measurement data. Among others, the company is busy with trials in cucumber cultivation at a North Limburg grower. Like Sendot, Yookr also has ambitions to keep generating new insights with new sensors. "We are working daily on a user-friendly dashboard with which we want to provide increasingly sophisticated harvest prediction insights." 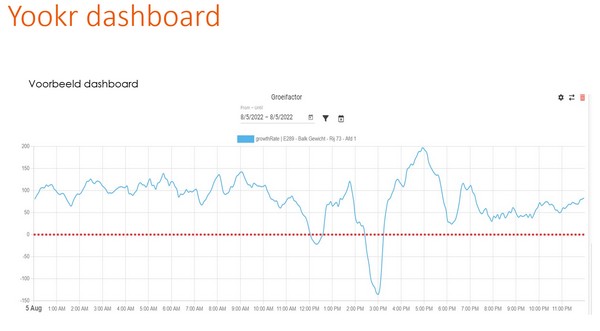 The closing speaker at the masterclass was Robert Zuyderwijk. Besides working for B+H Solutions and others, he is also a hybrid (part-time) lecturer in Business Administration Agribusiness at Inholland Delft. Standing in front of a room of students and interested parties is, therefore, nothing new for him. On Thursday, his presentation addressed how the effect of a special nano fertilizer based on silver spheres can be demonstrated using sensors. After all: it sounds a bit abracadabra, and so growers would like to see it confirmed in data, in addition to in the crop. 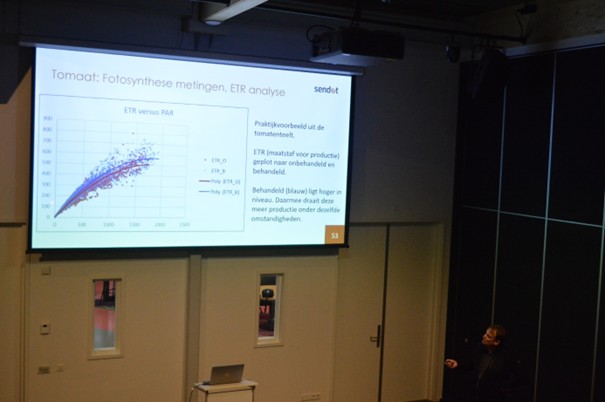 Excellent results have been achieved in gerbera crops, among others, as well as in tomatoes, of which Robert shows some graphs. The special fertilizer from the German-origin company helps spread the light better through the plant and also helps the crop cope better with differences in light. This prevents plant stress and results in increased production. In the case of gerbera, the strongest effect was seen in spring, during bright light changes. In the tomato graphs, Robert pointed to the ETR, the Energy Transfer Ratio. This was higher in the treated crop than in the untreated crop. In several crops, B+H Solutions sees that plants experience less abiotic stress when using their fertilizer, making tomato plants less susceptible to tomato spotted wilt virus (TSWV), among other things.

Sharing insights more often
The real closing word was for Roel. He briefly took the audience digitally into the greenhouse. The greenhouses the students work in are linked to Kassim, an online simulation tool for climate control. The students learn what turning the knobs can do to the crop and climate in the greenhouse without immediately being punished for a mistake. For the two greenhouse compartments in the World Horti Center, the students are not allowed to control the climate computer themselves.

Partly with the help of Kassim, the would-be horticultural specialists are gaining new insights. The master class also undoubtedly provided new insights, both for the students and other attendees. Sendot, Phytoconsult, Yookr, and U intend to organize more frequent sessions around Plant Monitor and Plant Insights. Erwin Gräfe, Commercial Manager of Sendot, is happy to explain more. 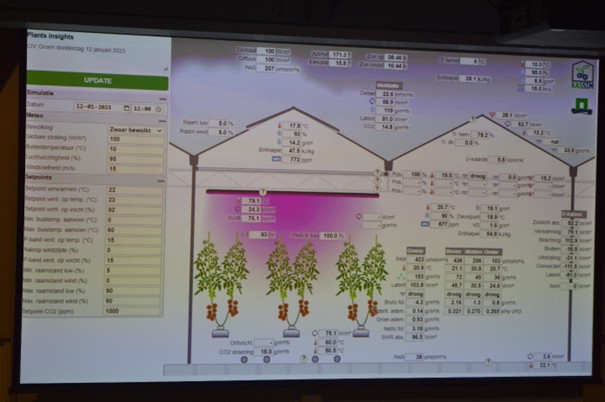 View into the greenhouse via Kassim