"Red, white and flamed colors with small or large flowers are popular"

This season, MOREL Diffusion introduces nine new cyclamen varieties in four of their six series, that range from 6cm to 22cm pot sizes. The new varieties have new colors of flowers and foliage. "At the moment, the red, white and flamed colors are the most popular. Also the small and large flower sizes are very demanding." This is explained by Isabelle Andre from MOREL Diffusion, a seed breeding company. 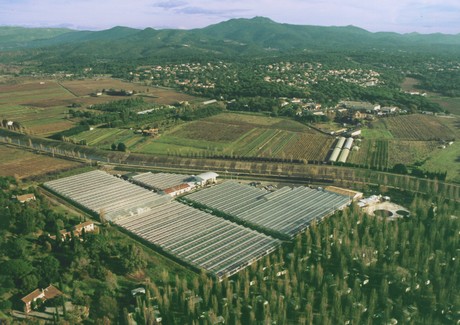 The company is established in the south of France, Fréjus, and is specialized in the breeding and seed production of cyclamen for over 90 years. Everything, from research to production and harvesting is carried out in Fréjus. This is done to have a total quality control during the entire process. The F1 hybrid seeds are produced in the subsidiary SCEA de MONTOUREY. The seeds are mainly supplied to Europe, but also to North/South America, Asia, Middle East, Australia and New Zealand.

The plants from MOREL seeds are characterized by their resistance to heat conditions during growing, tolerance against Botrytis, long shelf life at consumers’ and striking colors. "At the moment we have 6 series; Smartiz®, Metis®, Tianis®, Premium, Latinia®, Halios®, which range from mini to maxi flower- and pot sizes", says Andre

In the series with mini flowers; Smartiz® and Metis®, four new varieties are introduced. In the Smartiz® series, which is characterized by small leaves and the possibility for high-density growing, a new variety, named the Pure White has been introduced. "This cyclamen has pure white flowers and dark green foliage." 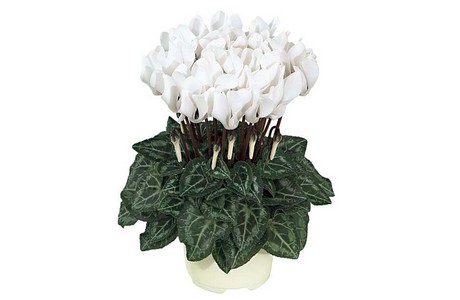 Pure White from the Smartiz® series.

Three varieties are added to the Metis® series; Rose Aquarel, Purple evolution, and Pure white silverleaf. "The former two have very dark foliage and unique colors. The latter one, the Pure white silverleaf has white flowers and green/silver leafs." This series is characterized by its compactness and high resistance for Botrytis.

There are two series with medium flower sizes; Tianis® and Premium. One new variety is introduced, namely the Scarlet red in the Tianis® series. "The habit of the plant is very round, the flowers have very dark green foliage and red flowers."

Scarlet red From the Tianis® series.

Latinia® and Halios® are the series that consist of large flowers. In the Halios® series, Salmon flame, two new Fantasia® Silverleaf varieties, and four new varieties of the Curly® range are introduced. "In one variety you have a double contrast: the bicolored flower (Fantasia®) and silver-designed foliage (Silverleaf). This is the biggest volume in Fantasia®." The Curly® range is a fringed mix with four colors; purple, rose, magenta, and salmon.

On top: Salmon flame, Fantasia® Purple silverleaf, and Fantasia® Magenta silverleaf. On the bottom, the new varieties of the Curly® range

"In general, the red, white and flamed colors are the most popular, but the Fringed types in the large flowers (Halios®, Curly®) are becoming increasingly popular too. Besides that the small and large pot sizes are very demanding. Therefore, the newest varieties are introduced in the series with small and large flowers."