Schoneveld: Connecting the chain is the key to success

The "Connecting the chain" concept of Schoneveld Breeding has proven to be a key success. Last week the breeder was awarded the AIPH's international Grower of the Year 2014. Winning the award is not the final station of the Schoneveld story, but the beginning," said Schoneveld's commercial director Louis Kester.

In the nineties, Schoneveld made an enormous growth. Due to the trade knowledge it was possible to adjust the seeds to the preferences of the market. Therefore, Patty started to breed Super Serie Cyclamen, which are now known as the original cyclamen. The Super Serie Cylamen is compact and has many flowers, every leaf has a flower. Moreover, the variety seemed to have a long shelf life. 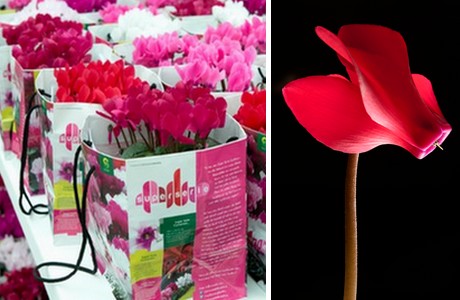 On the left, Flowertrails. On the right, Super Serie Carino

The demand for Super Serie Cyclamen kept growing till approximately 2009. Then, the market plunged and the cyclamen did not generate much yield for the growers anymore. Therefore, many growers stopped or planted less seeds etc. In order to generate growth, Schoneveld needed to take action. The first step was adding product categories. Next to cyclamen, primula obconica, primula acaulis, ranunculus, and campanula were added. The second step was connecting the chain. Schoneveld saw and sees a lack of information through the chain.

According to Louis Kester, “you may produce a high quality seed, but this does not automatically mean that it will be a good product.” Therefore, Schoneveld started consulting the growers and gave marketing advice and support. The final step was influencing the shelf in supermarketes. Hereby, one’s network is very important. They inform the supermarkets which cyclamen they need to place on the shelf. By including more special and popular varieties of the cyclamen, the original cyclamen may ride upon this popularity. This generates a higher yield for the shelf and consequently for the entire chain, including the grower. Thus, it creates a “pull-effect” for the grower.

The last two steps were also valued by the Jury of the AIPH. Schoneveld won the Grower of the year 2014 award. The jury assessed the entries on economic performance, the level of innovation, the effectiveness of the marketing strategy, high environmental standards and the organization of human resource management. Schoneveld Breeding reached the highest score on all separate criteria. 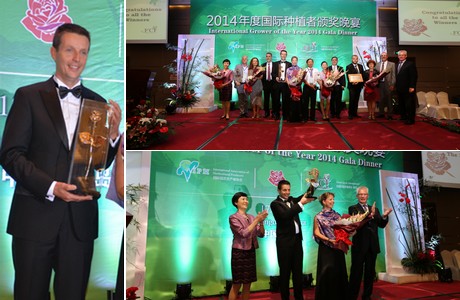 Winning this award has several advantages. Besides the media attention it also strengthens Schoneveld’s philosophy. Additionally, the award was presented at the Horticultural Gala in Qingdao, China. For the past two years, Schoneveld has also focused on the Chinese market. They identified the market for the cyclamen in Europe. “Economically speaking, the European market will not grow enormously and when looking at the market share, Schoneveld already owns the biggest market share of cyclamen in the European market.” Therefore, they made the decision to expand abroad. They are already active in 45 countries, including some Asian countries, like Japan, Vietnam, Korea but they also want to expand to North America, South America and expanding in Asia. “Europe still has the highest turnover, but these continents are growing.”

The connecting the chain concept is used everywhere for every seed. In South America for example, they work with a regional-manager with a large network for the growers and the market. “A high quality product is not sufficient.” Cooperation with other companies is very important for Schoneveld. They do not intend to become a big organization, but cooperating organically is most important.

Louis Kester foresees a bright future for Schoneveld. Winning the award is not the final station of the Schoneveld story, but the beginning. In the future we still have to work hard and there will be more operations with different partners. We find it very important to cooperate in an organic manner. “We believe in an organic growth, vertically as well as horizontally in the chain”. Additionally, product groups will be extended. Currently, the product groups consist of 5 groups and they will extend this to 10 or 15 in the future. They will use the same concept for the new product groups. By extending the groups, a broader product catalogue can be realized. These are all for one mission: ‘bringing the international grower to a better position for the marketing of plants’.