At the IFTEX in Nairobi, Kenya, AGRIPOLYANE was showcasing two types of films that are especially designed for the Kenyan rose grower. Both films have microbubbles which offer a couple of advantages; it allows good light diffusion, has a cooling effect and a thermic effect. This was explained by André Martin of AGRIPOLYANE, a French manufacturer of polyfilms who develops special greenhouse micro bubbled polyfilms with a patented technique since 1998.

Diffusion of light
According to Martin, the presence of micro bubbles in the multilayer film allows a perfect diffusion of the light without decreasing PAR (Photosynthesis Active Radiations). "In standard films, the diffusion is obtained by adding mineral charges which also reduce the PAR." said Martin.

"A bicolor that shows good contrast between colors."

Cooling effect
The micro bubbles are generating a cooling effect in the greenhouse. It can decrease the temperature by 6 to 8°C. The bubbles in the middle layer of the film reflect the heat. This prevents the greenhouse from warming up at midday. "It means: less greenhouse effect during the day, so lower temperature, less stress for the plants, better growth, and, last but not least, better working conditions for the employers." said Martin.

Thermic Effect
"The films are manufactured with high level of EVA, which increases thermic effect", says Martin. Therefore, the films are very suitable for greenhouses located in high altitude, facing cool nights during some periods of the year. 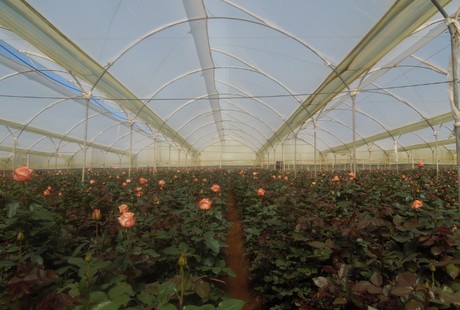 Both films are also available in 200 mµ and Anti Drip. Besides that, AGRIPOLYANE offers a 36 months life guarantee under the East African climate.