"Customers are increasingly asking for outdoor climbing plants earlier," says Marie Laure Rauline of Javoy Plantes Pépinières. For this reason, this French climbing plants grower and propagator is expanding their greenhouse. However, in spite of this early demand, the demand in general is not increasing. Therefore, they started producing young plants for export, five years ago. Their main market was Eastern Europe, however, due to the unrest in that area they are exploring other European markets. 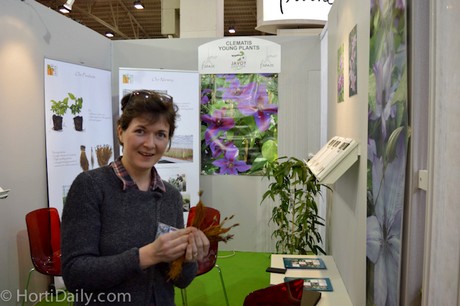 Marie Laure Rauline at the IPM in Essen, Germany. "For many years now, we have been attending this show. Also next year we will be here," she says.

Earlier demand for finished plants
Javoy Plantes Pépinières grows finished plants for garden centres and landscape projects in France. "We cultivate 390 different varieties of climbing plants, of which 120 varieties are clematis," says Rauline. "All the clematis are rooted and grown inside a 15.000 square meter sized greenhouse and put outside when they have enough roots," she continues. Outside, Javoy Plantes Pépinières have a 5ha sized land where they grow the clematis to finished plants. For this reason the growing season is dependent on the weather. According to Marie Laure Rauline, customers are asking earlier for flowers. In order to meet this early demand, they are currently building a new 4,000 square meter sized greenhouse. "Another reason to build this greenhouse is the fact that our other greenhouse is getting old. So, if the new greenhouse is finished, we will only use the old one to store plants in the winter, to protect them from the frost," she says. 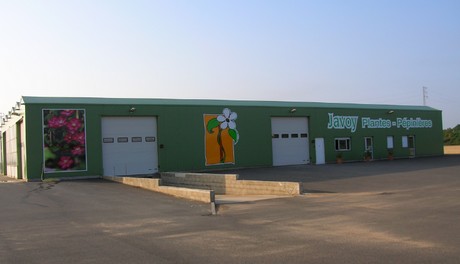 Other export markets due to situation Russia
In the same greenhouse where the finished plants are produced, Javoy Plantes Pépinières also produces young plants, which are mainly clematis. "5 years ago, we noticed a stabilization in the demand for climbing plants. Therefore, we started to export clematis young plants", says Rauline. At that time, their main market was Russia, but due to the devaluation of the rouble and the political unrest they had to look for other markets. "Last year was quite a tough year. The prices in Russia were terribly low which forced us to sell our stock to French growers. This is something we usually do not do," says Rauline. Therefore, they started to explore other markets in Europe. "Now we are working with a French producer who will sell its plants to the UK. So, for us it is the first time that our plants will enter the UK." 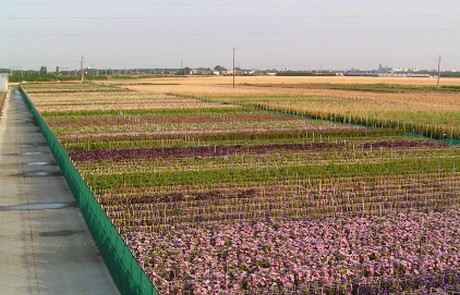 Assisting growers
During the cultivation process of our young plants, Javoy Plantes Pépinières will assist their growers. "We've made a guide in which we explain to the growers exactly how the plants should be treated to get the most beautiful finished clematis." Besides that, if growers have additional questions, they send Marie Laure Rauline pictures with the actual problem. "As we are growers ourselves, we can immediately see the problem and offer them a clear solution. I will print the picture and will mark what's wrong or what the grower's next steps should be," she says.