"It is all about the right genetics and a good image"

The pelargonium is a traditional well-known plant and the genetics of the plants are constantly being improved. According to Manfred Sitorius, Sales Manager at Endisch, a German breeder and producer of cuttings and half finished plants, the genetics are becoming increasingly important. "The plant should not only have clear and bright colors, but it should also have outstanding performances in the greenhouse and at the end-customer." For this reason, Endisch is constantly working on the improvement of their existing pelargonium assortment. Besides that, as the pelargonium is still considered an old fashion plant and the demand does not increase, they are investing in promotion (Brand awareness) and the expansion of their assortment. "This enables us to stay competitive," says Sitorius. 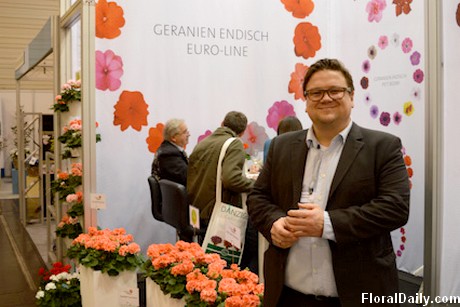 Manfred Sitorius at the IPM Essen in Germany.

The 'wow- effect' and compact-vigorous varieties
When breeding pelargoniums, creating new colors is important. "You need to get the 'wow-effect' says Sitorius. However, according to Sitorius, it is increasingly getting harder to find new colors. Therefore, it is important to also focus on other breeding aspects, like homogeneity, early flowering time, being weatherproof and better growing habits (compact/vigorous/branching) varieties. These aspects are also the main objectives of Endisch when breeding the pelargonium. According to Sitorius, they are very strong in the latter aspect; breeding compact but also vigorous varieties. "We are looking to breed varieties that have both compact growing in the greenhouse and vigorous outdoors. Like many other pelargoniums, they are compact in order to put as many plants in the greenhouse or on a transport trolley as possible. However, often these varieties do not grow larger and bushy. We try to breed them in such a way that they are compact in the greenhouse and become vigorous in the garden of the end-consumer," says Sitorius. After breeding a new variety, these are tested how they perform inside and separately outside the greenhouse. If they don't perform well in one system, they will not be used for commercial production," he continues. 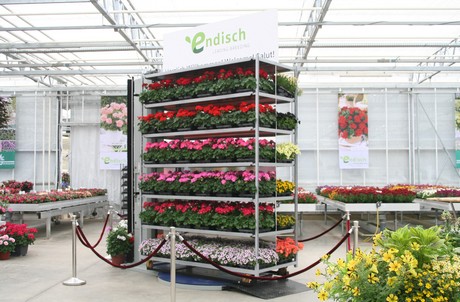 Endisch at the FlowerTrials 2015 in Germany.

Changing the image
The geranium is often considered an old fashion plant. "People think it is an old fashion plant, but actually if you look at the characteristics of the plant, it perfectly fits the needs of the younger generation", says Sitorius. "The current younger generation wants 'easy' plants. So, plants that are easy to take care of and the pelargonium is such a plant," he continues. However, according to Sitorius, it is still hard to communicate this message to the younger generation. "We need to change the image of pelargoniums and ornamental plants in general and make the younger generation more aware of the beauty and the easy handling of this plant variety. In order to reach this generation, Endisch directed their marketing activities more to the new media on Internet. "We intend to reach them through social media, like Facebook and Twitter. Besides that, as said earlier, the introduction of new and bright and strong colors is important to change the current 'old fashion' image. Over the last years, there has been a shift in colors, from classic colors like salmon or light red to bright colors like neon blue or hot pink. "In the past, the light red colored pelargoniums were highly demanded. Now, we see a demand for deep dark red colors. Also white becomes an increasingly more important color," says Sitorius.

Expanding assortment
"Last season was a good season for the pelargonium in Europe", says Sitorius. According to Sitorius, the season was long and therefore good. "There was a constant demand, which enabled the growers to deliver a constant high quality of plants. This offers good prospects for the coming season," he says. In spite of this good season, the demand for pelargoniums in general is not increasing. For this reason, Endisch started to expand their assortment. "Two years ago, we started to broaden our assortment. Now our assortment consist of impatiens, petunia, dipladenia and rosemarin," says Sitorius. In the coming years, they are planning to add more varieties to the assortment. "We will look at the current demand and will meet this demand by adapting our assortment to it," he says. 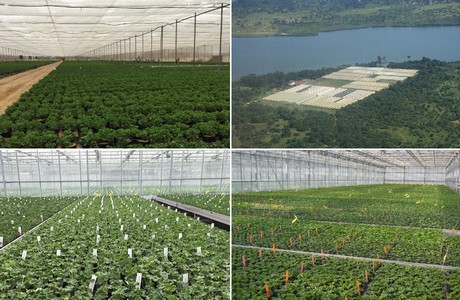 Endisch
Endisch is a breeder and producer of un-rooted, rooted cuttings and half finished plants. The mother stocks are located in Uganda and Egypt. "About 80-90% of our cuttings come from Egypt. Overthere, we have different types of greenhouses; both foil and glass greenhouses," says Sitorius. Then, from the mother stock location, the un-rooted cuttings go to Germany or to customers who require un-rooted cuttings. In Germany, the cuttings will be rooted in two different locations in greenhouses and distributed to growers all over Europe. "About 50% of the cuttings goes to the German market," says Sitorius.