"Small flowers have better quality, but are not accepted in the market"

There are a lot of developments going on in the petunia sector. According to Manfred Mehring-Lemper, a breeder at Westhoff, the traditional petunias are still very popular, but new colors, early flowering and compact varieties are becoming increasingly important.


Manfred Mehring-Lemper at the Cultivate '15 in Columbus Ohio.

New colors
For many plants and flowers, the color is important. This is also the case for petunias. "We realized the popularity of novel colors when we introduced our Crazytunia series, three years ago. The demand for these kind of petunias increased sharply," says Mehring-Lemper. In this collection the color is the main aspect; they differ from the original blue, white and red colors. "At the moment, the Crazytunia collection consists of 29 colors and is called a collection because the habits differ per variety," says Mehring-Lemper.

Early flowering
Also, early flowering becomes increasingly important. "I think it is an important aspect in the entire industry. Growing time means costs, so growers want plants to bloom early," says Mehring-Lemper. For this reason, Westhoff bred an entire series of early flowering petunias, called the Bingo series (Perfectunia in North America). "In the Bingo series, we emphasized the early flowering habits of the plant. So the entire series consists of petunias that flower earlier than the traditional petunia," he says. Currently, the series consists of 26 more traditional colors. 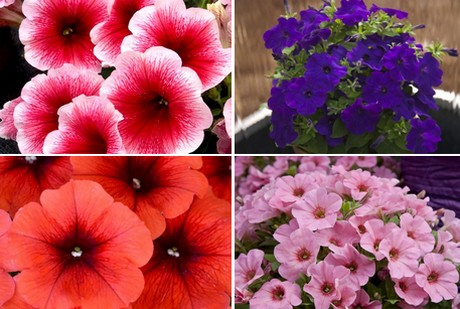 Compact
Another popular habit of the petunia is being compact. "As the market for mixed combinations is growing, it is important that the petunia will also fit in such a combo. For this reason, they cannot be too vigorous." Besides that, the compact varieties often flower earlier and are therefore often more demanded than the vigorous types. However, the vigorous types are still heavily used in landscaping or when they are on their own in a basket.

Other important aspects
Other important aspects of breeding petunias, besides the aspects that have been mentioned already, are the size and quality of the flower. "Small flowers often have a better quality, but these sizes are not accepted in the market. Therefore, a breeder has to find the right balance between the quality and the size of the flower," says Mehring-Lemper. Regarding the habits of the plant, branching, medium sized and dark leaves are important. "If the leaves are dark, the plant looks healthier and the contrast with the color of the flowers is greater."

Westhoff
Westhoff varieties are available worldwide. Mother stock holders in Israel, Africa and Central America build up Westhoff varieties. "We have out-licensed the mother stocks. Therefore there are always alternative sources for our varieties in case of an issue at one place," he says. Also the the rooting stations are located all over the world. "We do not have own or exclusive rooting stations but a lot of different companies root our varieties," says Mehring-Lemper. "For us and our customers this is an advantage. The growers can order the cuttings or liners at different locations and their preferred source," concludes Mehring-Lemper.