South America is a large supplier of flowers to the Russian market and is therefore well represented at the FlowersExpo in Moscow, Russia from 8-10 September. Colombia and Ecuador are the major South American suppliers and are presenting the results of their work at their own nation displays. Ecuador is a major supplier of roses; 70% of the roses sold in Russia are delivered from Ecuador. The booths at the Ecuadorian pavilion are therefore filled with roses. At the Colombian pavilion, carnations, alstroemerias, chrysanthemums and more are also on display, as well as roses.
Expanding assortment
Many South American growers are currently expanding their assortment. Even though Russia is a flower-loving country, the current situation is affecting the flower industry. Like everyone, South America is also affected by the unstable exchange rate of the rouble. "Our prices dropped by 25 percent and our volumes to Russia by 35 percent," says a Colombian rose grower. So, by adding more varieties to their assortment, it enables the growers to serve a broader market. "We are looking for markets around Russia," says a Colombian grower. 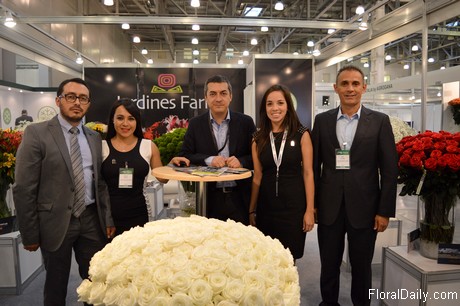 The team of Jardines Farms. The farm is located in Ecuador. They grow roses, spray roses and summer flowers on 140 ha. 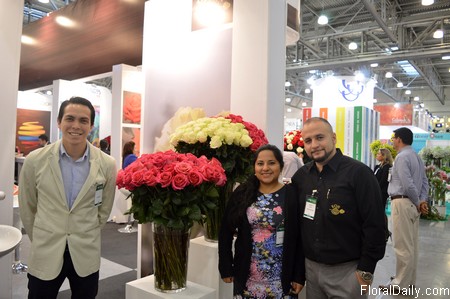 Gaco, the translator, and Jessica and Mauricio Ospina of EQR. They grow 143 rose varieties in a 60 ha sized greenhouse in the Cotopaxi area in Ecuador. 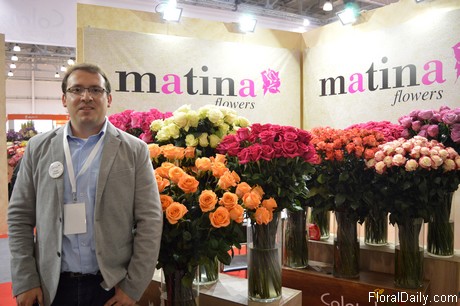 Colombian grower Jorge Ortega of Matina Flowers. He grows 37 varieties of roses in a 24,5 ha sized greenhouse. Next year he will expand his assortment to 40 varieties, which will enable him to enter new markets. 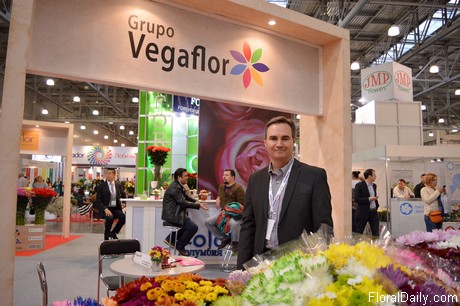 Colombian grower Miguel Vasquez of Grupo VegaFlor. He grows around 60 varieties of spray and single Chrysanthemums in a 64 ha sized greenhouse.
The editorial team of FloralDaily is also present at the trade fair to make a full photo report, which will be published on Monday 14 September.