Large growers often have to deal with large orders. Therefore, investing in techniques that enables growers to speed up the internal transportation is important. For potted plant growers, potting machines play an important role in completing this job faster. According to Per Kanne of Bekidan, a manufacturer of potting machines, compactness, user friendliness and a large capacity are some of the most important factors for a grower when deciding to acquire a potting machine. Therefore, the company has put a lot of effort into developing such a potting machine over the last few years.

With more than 30 years of experience in the horticulture sector with internal transportation and automated handling equipment, Bekidan is continuously looking for ways to improve their potting machines by keeping all of the above mentioned in mind. This resulted in a basic potting machine that possesses the important requirements mentioned above and even more. 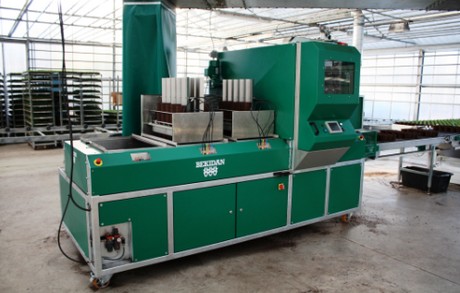 Compact
"Our basic potting machine is compact. Normally, the use of different units like tray and/or pot dispenser, filling unit and drilling unit, create a long setup of the potting machine. As we incorporated as much as possible in one machine, our basic type is only three meters long," says Kanne.

Three dispensers (1 tray dispenser and 2 pot dispensers), can be placed on the basic potting machine. The potting machine can handle different types of pots, ranging from 36 millimeter height with a 4.5 cm diameter to 135 mm with a 15 cm diameter. For example, round pots, square pots, molded pots, thermoformed pots and Jiffy pots. The system is designed and adjusted for the specific pot and tray, which are used. "A dispenser system for each type/size of tray/pot used is required," says Kanne. 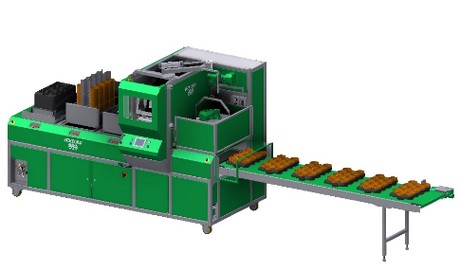 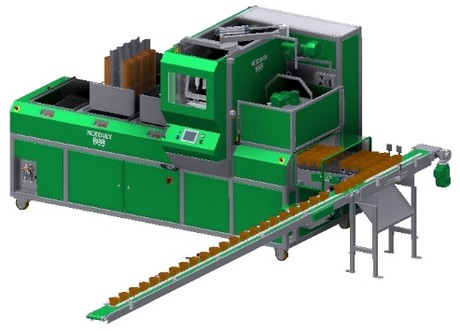 User friendly
Besides it compactness and large capacity, it is important that the workers understand the machine. "One has to learn how the software works and how the dispensers can be switched. We often install the machine at the grower, so we directly give an introduction on how to use the machine. Within a couple of hours, the worker will be familiar with the machine."


The potting machine and plant robot of Bekidan.

Bekidan
All machines are produced in Denmark and mainly distributed to growers in Northern Europe and Scandinavia. As well as potting machines, Bekidan also produces plant robots and vision systems, that control and sort the finished plants.