US: Using sports to promote plants

Plants and sports, is it a combination? According to Cortland Smith of Walnut Springs Nursery, it is. He came up with a concept that represents the colors of a football team with annuals and called it Sporticulture. "Growers always want to expand their plant sales and reach for new customers. This concept enables them to do so," says Cortland. At the Cultivate '15, the Sporticulture concept made its debut and received many positive reactions, it even won the Fresh Ideas Award. "Currently, 7 growers, including ourselves are using the concept and by next month we will be working with a distributor who will deliver our products throughout the nation." 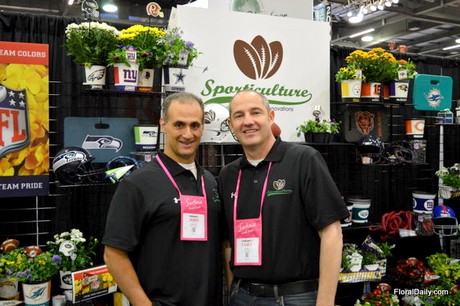 John Baldino and Cortland Smith of Sporticulture. "'Plant your team colors, grow your team pride.' That is the slogan of the Sporticulture concept" says Smith.

The concept
Sporticulture provides access to sports licensing and marketing opportunities to growers, retailers and landscape contractors. It is a division of Fabric Innovations. The concept provides growers with officially licensed NFL containers and tags. "The growers can choose for themselves which plants they are going to put in the container to create the ideal pot-plant combination that will represent their favorite football team," explains Smith.

Increasing popularity
The popularity of the concept increases fast. "We have a good presence in Baltimore and Washington D.C., but we see that increasingly more growers are showing their interest for this concept. Currently the growers from the east coast, mid west & south are growing team colored plants for the concept. The Green Bay Packers, Kansas City Chiefs, New York Jets, the New York Giants and the Philadelphia Eagles, for example, are all represented with plants now. Hopefully by next year we will have the entire National Football League represented in plants," he says.

Walnut Springs Nursery
At Walnut Springs, the nursery where it all began, Cortland also grows team colors. "At Walnut Springs we grow the Baltimore Ravens & Washington Redskins, which are pansies and mums," he says. About 5% of their 10 acre greenhouse is now dedicated to to the cultivation of their team colored annuals.