Mzurrie Flowers is expanding their business with a new 10 ha sized farm. This farm will be added to their three existing farms which are all located at different altitudes in Kenya. This new farm is their highest farm and is located at an altitude of 2,160 meters which will enable them to grow bigger headed varieties. This new farm will not only increase their annual production by 15%, but also their product range. "We will better satisfy the needs of our customers, who are mainly situated in the United Kingdom, Russia, the Netherlands, Australia, and the Middle East among other countries," says Irene Njeru, Sales and Marketing Manager at Mzurrie Flowers. 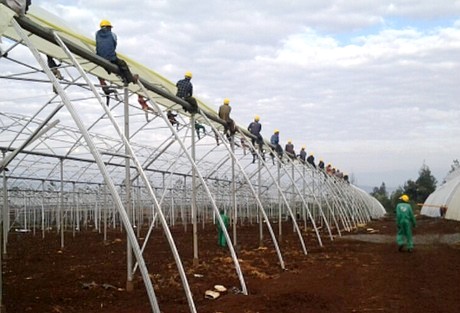 The plastic Hanuel greenhouse is being manufactured by Agrigreen. "The speed of assembling the greenhouses is faster than normal," says Raphael Mulinge General Manager Winchester Farm.

Planting already started
Currently, the new farm which is located in Bahati is under construction with each greenhouse being of 1 ha size. Eight greenhouses have already been constructed with 2 ha having been planted already. "In February 2016, we hope to have full production for the 10 ha. And when there is a good demand for the products from this farm, we have the possibility to gradually expand it to 30 ha or even more," says Raphael. 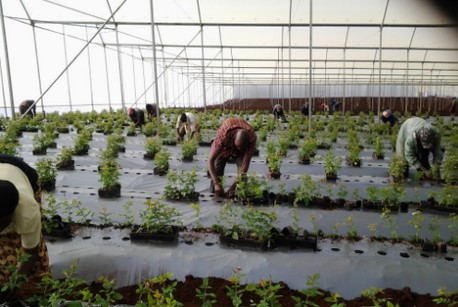 Four farms in total
The new farm will be the fourth farm of Mzurrie and is called Winchester Farm Bahati. The three other farms are: Winchester Farm Karen, Maji Mazuri Flowers and Molo River Roses. The Winchester Farm Karen is situated in Karen at an altitude of 1,830 meters with 9 ha under rose production and a propagation unit of 2400m2 producing 3.5 million plants/year. The Maji Mazuri Flowers is situated 50kms west of Eldoret at an altitude of 1950m above sea level with 30 Ha under rose production. The third farm, the Molo River Roses is situated in Kenya’s Rift Valley, 30 kilometers Northwest of Lake Nakuru at an altitude of 1,750 meters with 17.5 ha under rose production with plans of expansion to 27 Ha. At this farm, modern growing techniques including controlling of radiation using light screens and humidity through misters are being utilized.

Future plans
Mzurrie Flowers is constantly looking at ways to conserve the environment better. "In the future we will go further into green energy and waste water treatment," says Raphael.

Mzurrie will showcase their products at the IFTF in Vijfhuizen, the Netherlands, from 4-6 November 2015 and can be visited at stand number C2.16.