Philodendron: from a joke to sales

VDE Plant comes with a new product: the Mangrove Atom. It concerns the tropical plant Philodendron, which the breeder has included in his range for a little while now, but is now presented in an entirely new manner. Bas Uithol: “In nature the plant is found in tropical regions. The plant grows in trees under circumstances in which the area is flooded regularly: a so-called mangrove. The plant therefore does not necessarily need soil. After the plant is purchased, flush the soil from the roots, put it in a glass vase and put the roots between ornamental pebbles and you will have a completely new presentation.” the Philodendron roots are strong enough to survive without soil.

The Philodendron atom is a relatively new product. The average consumer was not (yet) aware of it; until Rob Verlinden showed it a few times in his television program 'Robs Grote Tuinverbouwing'. “We all of a sudden got all kind of questions: where can I buy it, how do I plant it, what does the plant need, etc.” explains Karin van Eijk. “Two weeks ago we put the plant up on our Facebook page, as a kind of joke, but we got so many enthusiastic reactions, after which we further developed the idea. And now also Rob in his broadcast has drawn attention to this new way of presentation of the philodendron, we decided to take the joke seriously and sell it as a complete set.”

Karin: "The Philodendron Atom is available online at the webshop of Bakker Hillegom. The plant will be delivered in a growing pot. Some customers are carefully testing it. We made a package to prevent the risk of a break in the supply chain. We can also deliver a do-it-yourself package a complete set, whereby the customer makes the composition at home. So customers can choose themselves for the preferred option."

Because of the many responses which Rob Verlinden received after the broadcast, the plant will be shown again next Saturday in his television program. 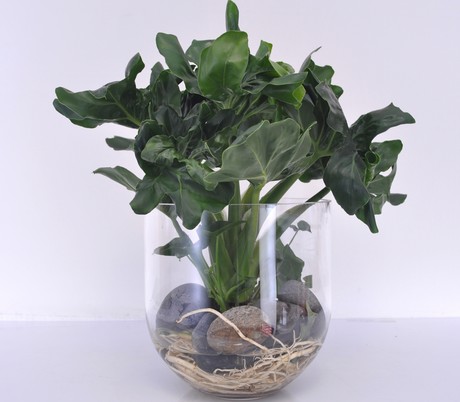 Last week, VDE Plant launched the Mangrove Atom at the Trade Fair in Aalsmeer, the Netherlands.