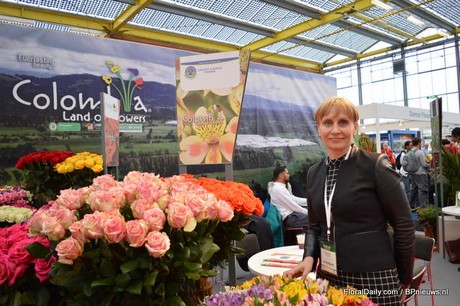 Tania Dolynko at the IFTF in Vijfhuizen.

Not much experience with China
According to Dolynko, not many South American growers have experience with the Chinese market. "It is a large flower producing country, so they never needed to import flowers. However, at the IFTF in Vijfhuizen, we met some Chinese importers who expressed their interest in large headed flowers. So, we have sent them some samples which they will test this week. In the coming two weeks, we hope to hear their feedback," says Dolynko.

Grupo Andes Farms produces roses and alstroemerias on 2 farms in the Savannah of Bogota-Colombia, with a total area of 50 hectares and employs more than 700 people. The upper photos were taken at the Monteverde Farm and the lower photos at the Flores de los Andes Farm.

Not varieties, but colors
During the IFTF, Dolynko noticed that the Chinese who visited her stand did not talk about varieties, but about colors only. "This might be because they are not familiar with these type of roses yet. Anyway, in general we saw a huge interest in large headed red roses. This is their preferred color. There was no interest in yellow colored roses at all," she says.

2 Valentine's Days
According to Dolynko, China is an interesting market because it has two Valentine's Days. One in February and one in August. "These days are widely celebrated with flowers and the one in August seems to be huge," she says. So, this will not only help them to increase their total sales, but also their sales during the low-season. "Our main markets are the USA, Russia, Ukraine, Europe and Japan. In these markets, the demand for flowers is low in August. So when adding China as an export market, we might also add an extra sales peak in the year."