Around 80 percent of the tissue culture plants worldwide are being produced in Asia and 90 percent of this production is taking place in China; annually, 3 billion tissue culture plants are being produced in this country. During the production lighting is essential and over the years, more and more attention is being paid to the type of lightning that is being used. According to Jan Dijkman of Philips, increasingly more Chinese producers are investing in lighting, not only to improve the quality of the tissue culture, but also to save energy in the long term. Therefore, Philips is continuously working on inventing new and improved LED's and they launched their latest LED module for tissue culture at the Hortiflorexpo IPM Beijing in China; a tissue culture LED module especially, and only made for the Chinese market. 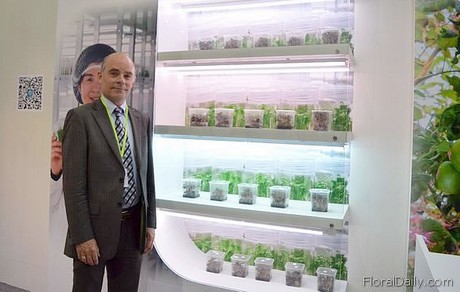 Jan Dijkman in front of the new tissue culture LED module at the Hortiflorexpo IPM Beijing in China. This module is available in three types; Deep Red/White/Far Red, Deep Red/White and White.

Energy savings up to 40%
The new tissue culture module is the improved version of the existing Philips GreenPower TLED. The first prototype of this module has been installed at a Chinese tissue culture grower of gerberas, namely 54 Farm. And Dijkman, is pleased with the results. "The new module reduces the energy costs up to 40 percent compared to the regular fluorescent lamps and 22 percent compared to the existing TLED," he says. According to Dijkman, the difference lies in the components of the LEDs; the chips. "We cooperate with companies that invent and produce these components and together we designed these new more energy-saving LEDs." Besides that, they only changed the necessary in this module. "The light spectrum, for example is still the same, but we integrated the batten and TLED into one GreenPower TC module," says Dijkman.

Increasing use of LEDs in China
Increasingly more Chinese tissue culture growers are using LED grow lights. In 2007 Dijkman introduced the use of LEDs in the Chinese horticulture market. According to him, the growers were very hesitant at that time. "For tissue culture production, lighting is necessary, but installing LEDs can be a large investment. In the past, growers wanted to see immediate results and therefore chose to install fluorescent lamps. The initial investment is lower, but in the end it will be more expensive. in contrast, the LEDs will reduce the grower's costs and therefore increase his yields. And over the last years, the last two years in particular, this is what increasingly more growers are understanding."

Direct contact growers
Next to tissue culture growers, Philips also supplies growers of finished plants, flowers and vegetables and city farms. The company has direct contact with all growers and sells through its partners in China. "We proactively contact the growers. Here in China for example, many greenhouses of finished plants and flowers are not equipped with lighting. Then, we contact the growers and together we will calculate the total investment and the yield it will generate. Then, when the outcome is satisfactory and the growers are interested, our partners in China will install the recommended lighting fixtures," he says.

Future development LEDs
According to Dijkman, the future for LEDs in China, but also in the rest of the world, looks bright. "When looking at the LED market in general, we see that 50% of the lighting used consists of LEDs. In the horticulture sector, this is not the case yet, but we see a sharp increase. The USA and Western European countries, for example are early adapters and now we also see it coming in other countries, like China.