Floriculture companies join forces and support Kenyan children (mostly Orphans) from slums to get an elementary school education. Last month, the Dutch marketing and processing company of Kenyan roses Decofresh, Kenyan rose farms Amor and Omang and Cargo company Kuehne and Nagel handed out around 500 soccer shoes and uniforms to four charity foundations that combine soccer and education in Kenya. The collection was coordinated with different activities of a Dutch elementary school and two Dutch local soccer clubs. The goal of this project is to give the children a push in the right direction. 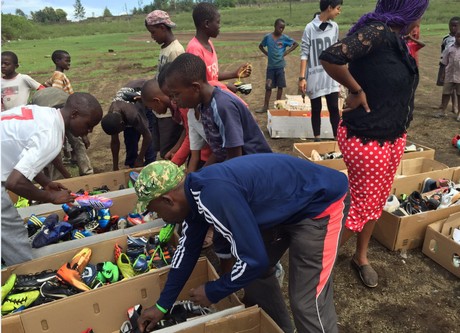 Soccer and education in Kenya
The idea to collect soccer shoes originated from Matti Arielle. "For several years now, I have been following Farah Mushtaq, a charity coordinator who is committed to getting Kenyan children from the slums to attend school, which is funded by limited donations. Even though attending the school is free of charge, many children are not going. As the children love playing soccer, a project was set up where the children can get soccer lessons, on the condition that they attend school,'' he says. Matti found it it a very good initiative and was eager to support it. "I saw these children playing soccer barefoot, so then the idea to collect soccer shoes from Holland crossed my mind." More than shoes
Together with a Dutch elementary school, called Het Bolwerk, in Sassenheim and two Dutch soccer clubs, Arielle started organizing activities to collect the shoes and uniforms (the majority were soccer shoes, but also running shoes). According to Arielle, the kids of the Dutch elementary school, played an important role. Next to the collection of these shoes, they also collected money to donate, around 1,300 euros, and made hand-painted t-shirts.

Partners
After collecting the shoes and shirts, they had to be transported to Kenya. This was done by Kuehne and Nagel, who funded the freight. Then the flower farms, Omang and Amor distributed the shoes at the different locations in Kenya. 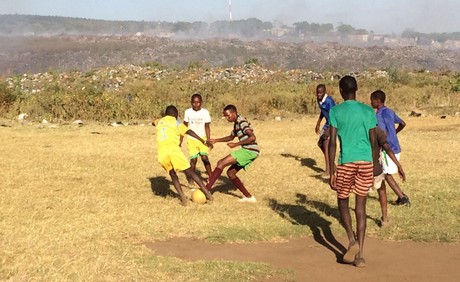 More projects in future
According to Arielle, this project has been a great success. "We see that more and more children are signing up for the soccer lessons. So, in turn they also have to attend school. Currently, around 80 children are playing soccer and are attending school on a regular basis,'' he says. Now, they are looking forward to the next project, which will start soon.