The wedding season has started in the USA and this means busy times for Colombian Garden Rose grower Jose Azout of Alexandra Farms. For him, the wedding season is the peak period of the year. Up to now, however, the wedding season for roses has been a bit less active than last year. "But, it is too soon to draw any conclusions as June is the month that marks the trend", says Azout.

Wedding season USA
Alexandra Farms' production is focused on the wedding season in the USA and Northern Europe. "The wedding season runs from April to October", says Azout, when referring to statistics published on Soundvision.com. "And therefore our production is high during these months too", he adds. Flowers are one of the most important aspects during a wedding and it seems to be a good market too as people do not hold back on spending some extra money for this special day. "Annually, 2.3 million couples wed in the US and $72 billion is spent on these weddings. That breaks down to nearly 6,200 weddings a day with an average budget of $20,000", says Azout.

Season slow till now
The wedding season has been running for a couple of months now and according to Azout, it has been a bit less active than last year for roses. Even though the prices are higher compared to last year, about 15%, the volumes are lower than expected. "We expected an increase of 25%, but it increased by 10%. This may be due to the expanding season of peonies or because of the increased offer of wedding colored roses. The good news about this is that there are still a few varieties available for purchase for the wedding season, unlike previous years where demand far outstripped the supply. You now may even find a few English Garden roses available", says Azout. Regarding the 'lower' demand, Azout points out that we are just in the beginning of June. "It really is too soon to draw any conclusions for the rest of the season as is the month that marks the trend", he says. 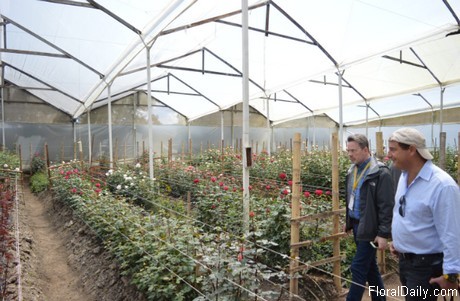 In the test area of Alexandra Farms. Click here to view the Photo Report we made last October.

Weather problems
Just like the other growers in Colombia, Alexandra Farms also had to deal with a lot of weather related problems this year, which affected the production. "The main problem was the viscous heat wave in March that brought huge increases in production too early for the demand", he says.

Popular varieties
According to Azout, the most popular varieties are those with romantic shapes and in whites, creams and pastel colors. "David Austin’s Juliet - a beautifully shaped, deep cup, pure peach English Garden Rose - continues to be the most sought after wedding rose in the market followed closely by Patience, a buttermilk David Austin rose with a strong myrrh fragrance. Next are the White Cloud (White), Pink and White O’Hara and Keira, another David Austin rose with a pink shade. These have great bridal colors." 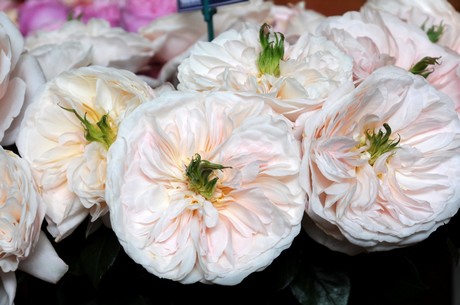 A great hit this year is the newly launched Charity, which is a white rose with a slight blush and a small green stamen center.

Azout also sees a shift in demand for pinks by the increased demand for medium pinks such as Ashley, a medium pink large headed rose that opens all the way and makes for an impressive bouquet.

Fragrance is back
Another trend, and probably the most notable trend Azout has noticed, is that fragrance is back in weddings. "Brides are asking for fragrant flowers for their bouquets. Whether it is stock, tuberoses, or garden roses, Bridal Bouquets are now expected to be larger than before and strongly aromatic", he says. "Fortunately, there are more and more fragrant varieties of garden roses available in the market these days. And we also grow fragrant roses, these six, presented below, are the most fragrant we have. " 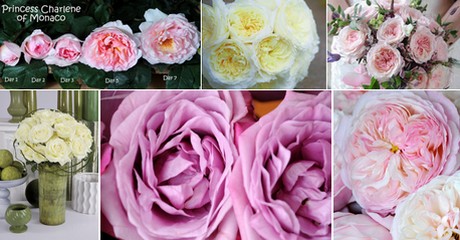 Clockwise, starting upper left: Princess Charlene: A citrus fragrance and a peach color in a decidedly unsymmetrical deep cup shape. Patience: Old myrrh fragrance. Keira: a sweet, fruity fragrance in these light pink, shallow cup shaped rose from England. Vitality: characterized by a French vanilla ice cream color and the most intense lavender fragrance. Heirloom: a lavender garden rose with an old fashioned rose smell sure to fill up any room. Constance: Flatter and larger than Keira and with more pink, Constance smells of pear and figs.