The pressure on Kenyan Flower exporters is high at the moment. "The lack of roses - and spray roses in particular - makes it difficult to complete our orders", says Almaz Ganiev of Milele Flowers, a Kenyan Flower exporter who mainly supplies Russia and the former Soviet countries. "Besides that, the delay towards the finalization of the European Union agreement, is a great concern to us and other flower exporters." 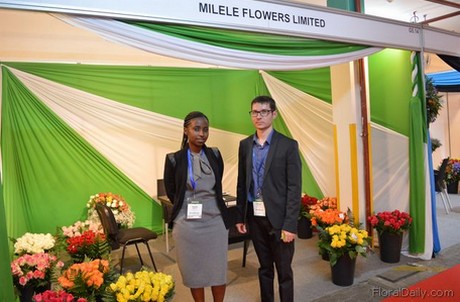 Stella Kabiro and Almaz Ganiev at the IFTEX in Nairobi, Kenya.

Lack of roses
According to Ganiev, there is a lack of roses -and spray roses in particular- on the market at the moment. "During the past two-three weeks the majority of our partners, flower farms, have pruned flowers to prepare more production for the beginning of the high season. Russia is one of our main export countries and the demand for spray roses is high. Therefore this has become a real problem for us. We have to 'fight' for the orders to send them complete", he says. Ganiev noticed that there is a tendency at most of the farms to minimize their losses and not sell too cheap during summer season, which is usually known as a low season. "In general, many farms depend on seasonal sales like Valentine's Day, Mother's Day and so on. When these holidays are over, they sell their flowers often below their production costs. Not this year. They all simultaneously decided to decrease the production which caused artificial demand and a lack of flowers on the market, especially of spray roses", adds John Macharia, the general manager of Milele Flowers.

Concern EU trade agreement
The delay towards finalizing the European Union Trade agreement is another concern. This agreement gives the African region’s products duty-free export access to European markets. It might become a huge problem for Milele Flowers and other flower exporters as most of the flowers are flown in from Nairobi to Amsterdam. "If it is not streamlined and well thought out by the Kenyan government it will make Kenyan flowers attract taxes and hence our Kenyan flower prices will be too high and out of the market as well", says Macharia. He hopes that the government will make the right decision on this policy paper. 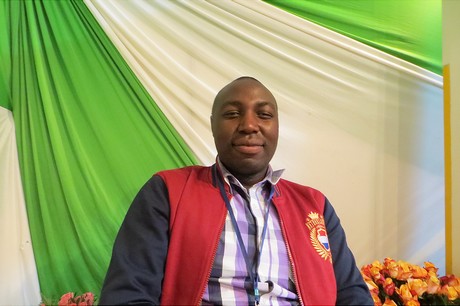 John Macharia at the IFTEX in Nairobi, Kenya.

How to cope with it?
Are you not afraid that your clients will shift to flowers from other countries? Ganiev: "No, we always have to deal with high competition in the flower sector. All over the world we see clients looking for the best offers and especially regarding the medium and small head roses. We always try to compromise: find an option which will suit the client’s demand for quality and be perfect for his wallet’s volume. And besides that, the Kenyan flower and its quality is well-known in the market", he says. Therefore, he does not expect his clients, who got used to it, to shift to flowers from other countries. "Kenyan cut flowers is a special category of flowers, they are not like Ecuadorian or Colombian roses and not like local. Our flowers always occupy a definite niche and place in the assortment of our clients", he says.

Russia demand Kenyan flowers
Russia and the former Soviet countries are one of the main export markets of Milele Flowers. And in this market, Ganiev, sees an increasing demand and opportunities for the Kenyan flowers. "In terms of consumption by the Russian local florists, we see the trend of minimalism in making bouquets: the simpler the more beautiful. If you study offers in florist boutiques you notice that flower compositions tend to be small in size, romantic and simple, European floristic traditions spread over Russia too bringing fresh ideas and adding some additional accessories for decoration purposes. Such as putting desserts with flowers to make them “sweeter”. Bouquets in “hat boxes”, with toys or small puppets. And Kenyan roses serve for such means. Decorated with a few types of foliage and beautifully arranged in wrapping paper they can make anything a nice bouquet.'' 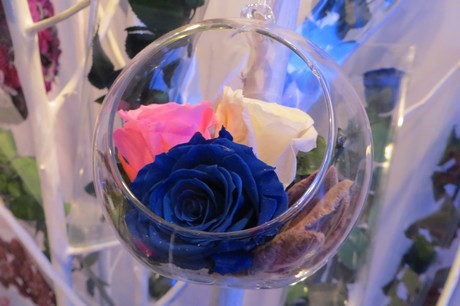 A tiny decoration made by by Waridi Creations who was also exhibiting at the IFTEX. According to Ganiev, this is an example of what is being increasingly demanded in Russia.

Expanding markets
Even though Russia is one of Milele Flowers' main export countries, they see opportunities to expand markets. "Kenyan flowers are finding their way to markets and countries that have never imported from Kenya." And it is not a one way stream. "We also receive increasing demands from companies that previously did not import from Kenya. And their volumes are increasing rapidly", says Macharia.