It has been a warm and humid summer in Minnesota which affected growers in several ways and their sales in particular. "The tough weather mainly slowed down the traffic to our three garden centers", says Nik Wagner of annual bedding plant and young plant grower Wagner Greenhouses. 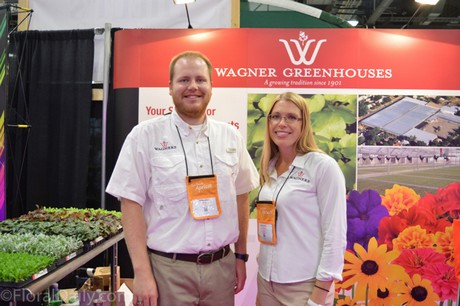 Nik and Laura Wagner at the Cultivate'16 in Columbus Ohio, USA

Weather
According to Wagner, the temperatures this year were about 10 to 15 degrees Fahrenheit higher compared to the warmest days in other years. "Typical temperatures are about 80-85 degrees Fahrenheit (26.5 -29.5 degrees Celsius) during the warmest days. But this summer there were multiple days we had heat waves of 95-100 Fahrenheit (33 -38 degrees Celsius) degree days and tropical humidity. Also, there has been continual storm patterns that move through causing some flash flooding," he says.

Sales
The weather mainly affected the sales of many growers and also that of Wagners Greenhouses. They own three garden centers in Minnesota and they noticed a significant decrease in traffic during these rains and high heat. "There were at least 5-6 days throughout this summer where the heat index was close to 105 degrees Fahrenheit (40.5 degrees Celsius). And with this heat, it is quite logical that people are not thinking about buying plants and planting their garden. Besides that, the flash flooding also discourages people to go out by car."

Production
Fortunately the weather did not heavily impact the production of finished plants at Wagners Greenhouses. "As the weather conditions varied a lot, we only had to adjust our irrigation program to the level of humidity in the air. When it is high, we do not need to water as often, but if it is low we have to water more as the sun is more intense for us and the plants will dry out faster. But all in all, the production was OK."

And the production of young plants has been good during this summer. According to Wagner the quality was even better than last summer, but this mainly has to do with their continual changes in their growing techniques, methods as well as personnel changes. Last spring, for example, they installed the fourth generation of Visser plug ﬁxing technology. The Visser TIFS-4 is a twelve gripper Tray Inspection & Fixing System capable of processing over 10,000 plugs per hour. "And we are still working on optimizing new software and machinery."

Forecast
For the coming weeks, there is some nice weather coming up in Minnesota, which will drive traffic into the stores of Wagner. "People will start re-planting fall crops and frost tolerant plants for fall soon." And regarding the young plants, many plants are being shipped to the southern US. "The sales are good, similar to last year." And after that, we will start the production of the longer crops for spring. It will be a good spring as sales are looking nice for that season; many customers already ordered."

Wagners Greenhouses
Wagners Greenhouses is established in Minnesota and has two greenhouses; a 4 acre greenhouse in Minneapolis and a 4 acre greenhouse in Hugo. They mainly grow annual bedding plants for Spring and Fall sales, which they sell as plugs to growers throughout the United States and finished containers for their own retail stores. They also grow liners of Cyclamen, Gerbera, Ranunculus, and Primula at other times of the year for potted plant growers all over North America.