Kenyan flower growers had to deal with a cold and rainy summer. Many farms had to cut back their production due to the occurrence of downy mildew, which, in turn resulted in higher auction prices. Now, the situation is recovering. Growers are increasing their volumes again and the prices have returned to a normal level. This is explained by George Kanyi Mwangi of Suera Flowers, a 38 ha rose farm in Nyahururu that need to cut their production by 50 percent during these months and is in now at about 80% of their production volume. They hope to be in full production again by October. 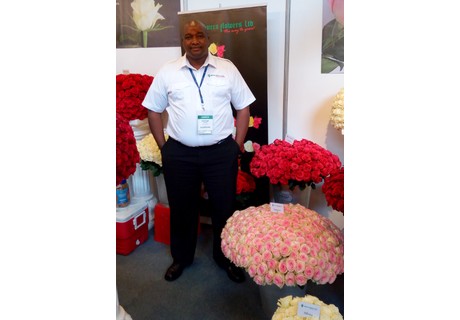 George Kanyi Mwangi at the IFTEX in Nairobi, Kenya.

Cold and rainy weather
From April to July, Kenya was hit by some cold and rainy months. "In general, these months are more cold and rainy than the rest of the year, but this year it was a bit extreme. We had to deal with heavy rain showers and the temperature here in Nyahururu was about 4 to 5 degrees lower than usual during this time of the year, which is about 10-15 degrees Celsius", says Mwangi. "This low temperature prevented the crop from growing and the heavy rains caused diseases like downy mildew. For this reason, we had to cut down the crop by 50 percent." At the farm of Suera Flowers.

Higher prices
Besides Suera Flowers, many other Kenyan farms had to deal with this 'extreme' weather. And for this reason, the flower prices at the auction increased sharply. "About 50 percent of our production volume is sent to the auction in the Netherlands and the other half is being send directly to the Middle East, Russia and Japan. Due to the low supply of flowers at the auction during these cold and rainy months, the prices increased. They were about 10-20 percent higher compared to the normal prices during that time of the year", says Mwangi.

Recovering
Fortunately, the weather improved and returned to its normal conditions. "Now the crop is coming back and is doing great. We are at about 80 percent of our volumes. In October we hope to produce 100 percent again", says Mwangi. And not only the farms are recovering from the weather, also the prices. According to Mwangi, the prices are not as high anymore because the flower supply to the auction increased. "The prices are similar to last year and they will probably increase in mid-September."