The majority of the orchids in India are being imported from Thailand and Malaysia, but this could change in the future. Research claims that the climate along the coastline of Odisha, an eastern Indian state on the Bay of Bengal, is good for growing orchids. This in combination with the governmental subsidies, is motivating growers to start up a orchid farm. However, there are still some bottlenecks that need to be tackled to make it a success. Hobby flower and fruit grower Prashanta Rout, who is eager to establish an orchid farm in India, shows the potential and problems of growing orchids in this country. Photos taken by Prashanta Rout at an Indian orchid grower.

Orchid cultivation in India
In India, the majority of the orchids are being imported from Asian countries like Thailand and Malaysia. According to Rout, there are orchids that are being cultivated in the country, but this is just on a small scale. "Only two or three Indian growers are cultivating orchids on 10 to 15 acres land for just about four years. They supply the domestic market", he says. However, the acreage of orchid cultivation is increasing. A large farm from Bangkok recently started cultivating orchids on 40 acres of land. 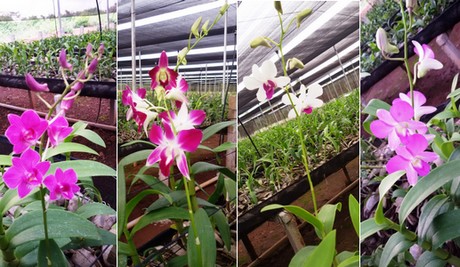 Potential
Lately, a survey, of which no official report is available yet, has been conducted in Odisha to examine the potential for orchid cultivation. "According to the survey, the 500 kilometer coastline of Odisha has a high level of humidity, which creates a good climate for orchids to grow." And even though they cannot grow as many varieties as Thailand and Malaysia, they can reach the same quality. "In these countries, they can produce about 12 to 15 varieties and here in Odisha about 6 to 8 varieties can be produced. Due to the climate, a same level of quality can be reached and as the majority will be supplied to the domestic market, the flowers are often fresher", says Rout.

On top of that, as land is expensive, the government gives subsidies to growers who are eager to start up a farm of 1 acre or less. "The government supports local production for the domestic market. So, orchid cultivation on a commercial basis is not being subsidized." However, this does not prevent large foreign growers from establishing a commercial farm, like the large 40 acre farm of this Bangkok company, mentioned earlier. "And as buying the land is too expensive, leasing is a good alternative. A grower can lease land for about 10 years and it will have a payback period of two years", says Rout. Bottlenecks
Next to the high potential of establishing orchid farms in Odisha, there are some bottlenecks. According to Rout, there are 4 major setbacks; lack of knowledge, high cost for orchid plants (saplings), lack of proper infrastructure and lack of access to local and international markets. "As it is quite a new sector for India there is not that much know-how about how to cultivate orchids. Therefore, not that many growers are eager to start in this business. Besides that, there is still much that can be improved regarding the storage, packaging and transport of orchids. Finally, the plants (saplings) are being imported from Thailand; which is very expensive. The plants are produced through tissue culture technology which is not carried out in India. About 30 to 40 percent of the total costs of the project goes to the imported tissue cultured plants. So, as well as a setback this can also be an opportunity for farms to start producing saplings through tissue culture process in India."

Starting up farm
And Rout is also eager to enter the orchid sector. Currently, he grows a variety of flowers and fruits as a hobby and is very interested and immersed himself in the cultivation of orchids. "My partner and I want to start up a 1 acre farm each and want to let it grow into a commercial farm over the years. Besides that, we want to start tissue culture cultivation. However, for all of this we need proper consultancy and this is something difficult to find at the moment. In about three years, we hope to grow the first orchids for the domestic market. Then we are eager to export and eventually start tissue culture cultivation."