"For over 10 years, no mini impatiens have been shipped to the auction here in Japan and I am sure there will be a good market for this product', says Shoichi Oshio of Floralcrest, a Japanese grower of cyclamen, impatiens and some mini impatiens. He wants to broaden its mini impatiens assortment and re-introduce this variety to the Japanese market. Currently he is looking for suppliers of cuttings. 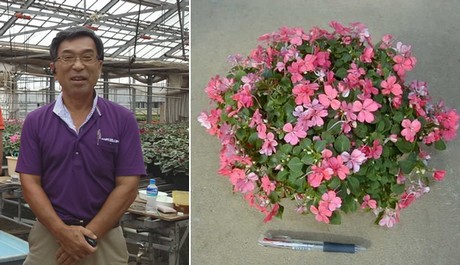 On the left: Shiochi Oshio. On the right: Mini Impatiens grown by Oshio.

Demand
"As far as I know, no one in Japan is growing these mini impatiens at the moment and, according to the auction statistics, no mini impatiens have been shipped to the Japanese auctionover the last 10 years", says Oshio. According to him, there is a lot of potential for this variety as his customers who see this variety are very interested. "Currently I grow the mini impatiens on request. Many of my customers are home centers and they demand small plants that fit the usual small sized Japanese apartments in the city. Therefore, I decided to visit these home centers and showcase the variety. And many centers ordered afterwards." 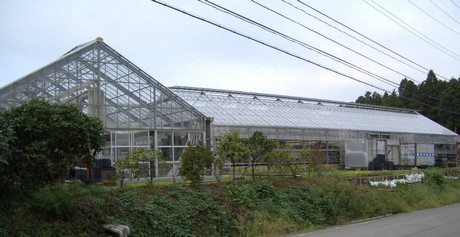 Production
And producing the mini impatiens is not something new for Oshio. "A long time ago, maybe more than 10 years ago, I used to grow mini impatiens. The prices were actually quite good, but the oil cost increased, so I had to change to another crop", he says. So, for years, Oshio cultivates cyclamen during fall and impatiens during spring in his 3,000 m2 greenhouse near Tokyo.

Increasing assortment
Currently, Oshio grows two colors of mini impatiens; red and pink. But he wants to increase its assortment to about 7 colors. The only obstacle he is facing is finding the right supplier. "The company in Europe which had been selling Mini Impa to me had stopped growing, I don't know why, but now I cannot find it anymore."

2018 full production
"If I find a new supplier, then I will start testing them this spring and introduce them to more home centers in Japan. The year after, I can hopefully move to full production.''

Oshio (on the right) with guests from Korea at the IFEX 2015 in Tokyo.

IFEX
Also this year Floralcrest will have a booth at the IFEX again. This show will be held from October 12 -14 in the Makuhari Messe in Tokyo, Japan.