'It's possible to mix all kind of colors'

Growing different varieties in one pot is challenging as a grower often has to deal with the unequal growth habits of the different varieties. For this reason, increasingly more breeders are investing in developing new varieties with similar habits and Brandkamp is one of them. This German breeder and propagator has invested years in breeding pot chrysanthemum and garden mum varieties with the same habits and now owns two 'families' that are suitable to mix.

Demand younger generation
A mix of plants in one pot is trendy and the demand for these kind of products has experienced a sharp increase over the last few years. Therefore production of several colors in one pot has taken up more and more space.

According to sales manager J�ürgen von den Driesch, the demand from the younger generation is what makes the mix interesting to cultivate. "In several countries, we see an increased popularity of this product and especially among the youngsters. Therefore it´s possible to mix more or less all kind of colors", says von den Driesch. "Important is to sell them in a colored pot that fits the mix. It upgrades the entire product", he adds. 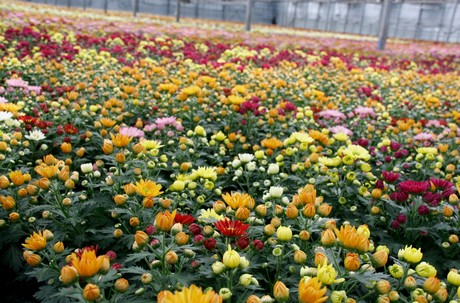 Even though a grower can play with the color combinations, he has to take into account the pot size. "In the south of Europe bigger pot sizes are strongly in demand, in the middle and the north of Europe smaller pot sizes and smaller plants are desired."

Due to the increased popularity of mixes, the chrysanthemum is not only a product for the autumn season anymore. "In early summer, in June, the sales of these mixes already start."

Same habits
When cultivating mixed pot chrysanthemums or garden mums, it is essential to combine variety groups that have the same habit, flower time and flower size. And this has been an important goal of Brandkamp.

Over the years, Brandkamp has built up its range of pot chrysanthemums and developed the family of Pemba. "This is one example of the extensive breeding range of Brandkamp that has seven colors growing and flowering all absolutely equal. It guarantees an easy cultivation for small pots, bigger pots and window boxes as well." 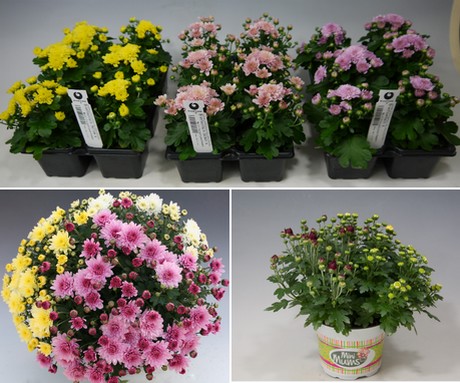 On the segment of garden mums (Multiflora), they now have the Branfountain family. This family, that consists of five colors, is also growing and flowering equally and is suitable for small pots and big container production as well.

IFTF
During the IFTF in Vijfhuizen, that will be held from November 2-4, 2016, Brandkamp will be showcasing its varieties at booth number C5.03.