After some challenging summer months, the winter season seems to have begun in Ecuador. "Since last Friday, it is raining, it is more cloudy and the temperatures are low", says Sebastian Padula, Sales Director at Josarflor, a rose farm that grows around 100 varieties in 35 hectare greenhouses in Ecuador. 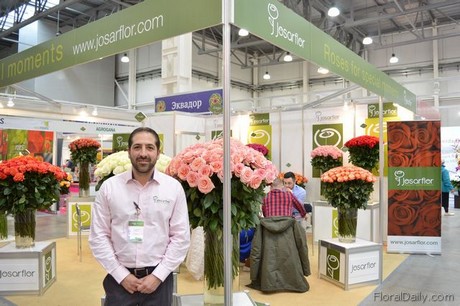 Sebastian Padula at the Flower Expo in Russia, which is one of their main markets together with Europe and the USA.

Back to normal
Ecuador had some unusual winter weather in 2015. "Due to El Nino, the winter weather was different. We had a very hot winter with much sunlight", says Padula. This year, the winter weather seems to have gone back to normal. "After a challenging summer with cold mornings and nights, we have had good weather for about three weeks. There was a lot of sunlight, open days and the temperatures were stable. However last Friday, the winter seemed to kick off. Since then, the temperatures are lower, there is less sunlight and there are long rainfalls", says Padula.

Decrease production
For sure, the current weather conditions will decrease the production volume, but this is something they and all farmers have to deal with during this time of the year. However, as it has been a while since they experienced a usual winter, it is very difficult to predict the decrease in production. "Currently, we are back in full production, but it will decrease due to the low luminosity and the rains will affect the crop soon."

Prices
Over the last couple of weeks, the prices have been stable. "They were not as high as they were one month ago, because there was not that much on the market at that time", says Padula. For the coming weeks, as the production will decrease at many farms, he expects the prices will be stable.

Forecast
According to Padula, the coming days will probably be similar to the last couple of days, which are marked by a midday temperature of about 18 degrees Celsius, rains and clouds. "A usual winter seems to kick off", he concludes

Josarflor will be present at the IFTF in Vijfhuizen, The Netherlands and can be visited at booth number B3.42.