The poinsettia season is in full swing. For a couple of months now, nurseries have been growing their crop that should be ready in a couple of weeks. Also at the British Newey Roundstone Nurseries, the greenhouse is filled with poinsettias and this year, thanks to higher demand, they increased their production by 20 percent. 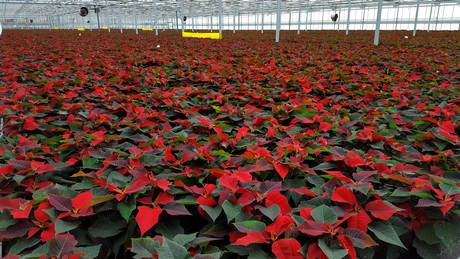 200,000 poinsettias
On 10 acres, Newey Roundstone Nurseries grows 200,000 poinsettias in West Sussex. Red is the traditional color of the poinsettia and also the most demanded color in the UK. Therefore, Newey Roundstone Nurseries decided to only grow the red varieties, but in two sizes. "16 weeks ago, we started growing the two liter pot and 13 weeks ago, the one liter pots. This latter size is the most common size we produce", says Stuart Whiteman; Nursery manager. At the end of November, the poinsettias should be ready to leave the greenhouse. 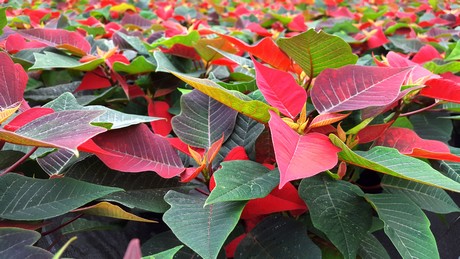 Influence Brexit
Since the Brexit, the pound sterling dropped in value against the euro, so one might link this occurrence to the increase in demand for locally grown poinsettias too. However, according to Whiteman, this is not the case at the moment, but it might be something to take into account for the future. "The demand for poinsettias has been increasing over the last years. Therefore, we have made the decision to increase our production by 20 percent. And we made this decision before the Brexit. At that time, we did not know what would happen afterwards. Now, we see the drop in value of the sterling and, when going forward, there might be a view that actually growing poinsettias within the UK rather than importing them might be a better avenue, certainly from a value perspective", concludes Whiteman.

Roundstone
Newey Roundstone Nurseries are one of the UK’s largest propagators and producers of protected ornamentals plants. For over thirty years they have been growing, investing, innovating and distributing the highest quality plants to retailers and professional growers. Operating out of sites across the Chichester area of West Sussex they are one of the UK’s largest and most advanced propagators and growers of protected ornamentals with close to 45 acres of commercial horticultural production sites with specialist facilities handling propagation from both seed and cutting. In addition to their bedding plant business, they also have two wholly owned subsidiary companies supplying herbaceous perennials, alpines, herbs, shrubs, liners and specialist trees to retailers, professional growers and landscapers. Their perennials, alpines and herbs are grown at Newey Garden Ready, based near Beaulieu in Hampshire and their shrubs, liners and trees are grown in nurseries in Pulborough and Chichester in West Sussex.