Varinova's quest for the perfect cyclamen

At the trials of the Dutch cyclamen breeder Varinova over 300 cyclamen form a spectacular array of different colors. The varieties are being compared and put on display at their greenhouse in Bleiswijk, the Netherlands. The trials started on October 24 and will be open to visit till November 11. 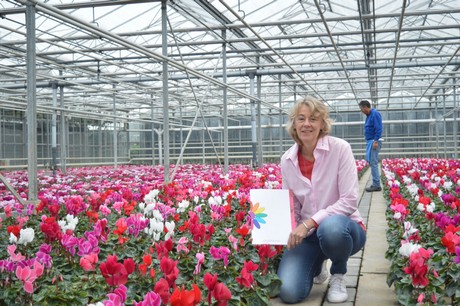 Trials
For several years now, Varinova organizes their so-called Varitrials. Over 300 varieties, including several of their colleague breeders, are being compared and on display in their 7,000 square meter greenhouse. "These trials not only enable us to see and show how our new and existing varieties are growing separately and in mixes, but it also offers us the opportunity to learn about the demands of our growers, exporters and consumers", says Carolien Klein of Varinova. 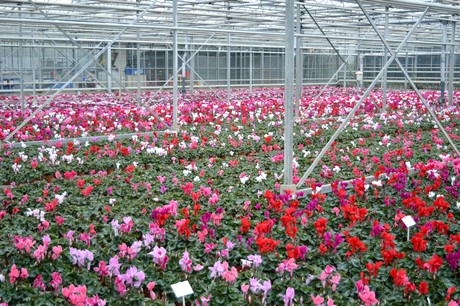 The larger varieties are grown on a concrete floor. In this picture the cyclamen mixes. These cyclamen varieties are on display both, in mixes and separately. "In the mixes, we show the uniform growing habit of the different varieties in the series."

The cyclamen sorted by color.

Popular varieties
One of the most popular varieties is the Goblet Shine Wine Red for outdoor use, which distinguishes itself by its shape. "When you take a look at the plant from above, it looks like a goblet", says Carolien. The Goblet is (limited) available in 3 bright colours.

The Goblet Shine Wine Red. On the right, the view from above.

Another popular variety is the Picola Shine Red, one of Varinova’s micro F1 Cyclamen. The whole series, that consists of 13 colors, has a very compact shape with a special leaf type. "Over the years, we have seen a shift in demand for smaller varieties, both from the market and the growers. For the growers, the possibility to put many plants per m2 and a short cultivation period, Picola is an attractive and easy product to cultivate and to sell." 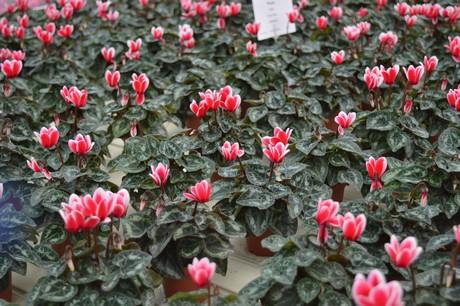 Varieties with potential
The trials are also used to test varieties and receive feedback on the new and existing varieties from the visitors. And there are several interesting varieties with potential. The Pythagoras, for example, is a special three colored concept with a lot potential, but is not being produced at the moment. "The three colors in one pot give a nice effect, which caught the attention of the consumers. Especially in Germany, the demand for this variety was very high. Four years ago, a German grower started to cultivate this variety, but stopped as retailers found it too expensive. It is a more expensive plant as three seedlings are needed to create this plant. Now, at the trials, we still showcase the variety." 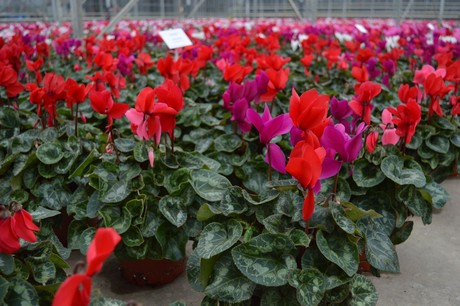 The Pythagoras concept. Three different colors are sowed separately after which the seedlings are potted together in the middle of 1 pot. This concept is available in pot size 15-17 cm with large flowers and pot size 12-13 cm with mini flowers.

Another variety that is currently still being trialed is a large cyclamen, called the Magnia. This variety is presented in a 17 cm and in a 23 cm pot size at the trials. "It is a large variety, that needs more cultivation space, but a grower can also ask more for this variety. Till now, the reactions are very positive and we think this variety will have a high potential in Italy as they prefer large plants, which they can put outside. Our Magnia in 17 cm pot, for example, is already trendy over there." 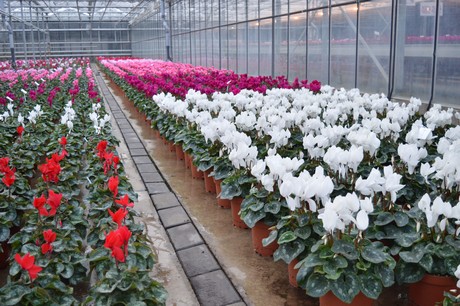 On the left, the Magnia (here in a 17 cm pot size) is the large flowering F1 Cyclamen series and is suited for the larger pot sizes of 14-20 cm. On the right, the Magnia in a 23 cm pot.

Increasing the popularity outdoor cyclamen
Varinova exports cyclamen seeds to growers in Europe, Japan, the United States, and increasingly more to Australia. In Europe - and especially in the Netherlands- the consumers are still quite hesitant to place cyclamen in their garden, even though they are marketed in the stores as outdoor cyclamen. "We want to increase the popularity of the outdoor cyclamen and we therefore decided to largely promote them during the trials these days." And they seem to draw the attention of several visitors. "Earlier this week, we welcomed a group of German buyers who were surprised about the amount of flowers and bud development." The outdoor trials are outside for three weeks now and can stand night temperatures up to minus 3 degrees Celsius. 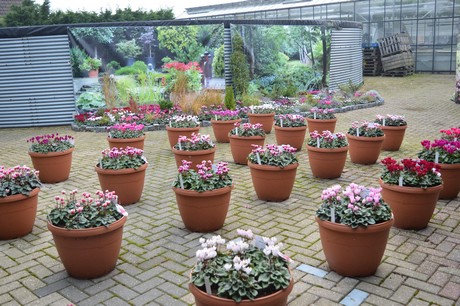 The outdoor varieties on display.


The Goblet Shine Wine Red planted in a container outside.

The outdoor cyclamen planted in a garden.