The total European garden market sales increased by one percent in 2015, compared to 2014, to 88.1 billion euros. This has been reported by the German Institute for Trade Research IFH Köln. 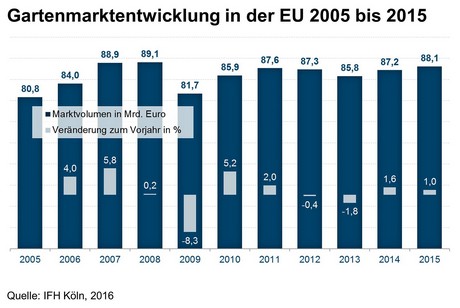 Flowers and plants take largest share
With a share of 53 percent, the largest part of the sales in the garden market is generated by the flowers/plants for inside and outside - and when including the biologically-chemical gardening requirements, this share increases to 62 percent. In absolute terms, this means a sales volume of 54.3 billion euros, 39 percent of which is divided into flowers and plants for indoor use, 47 percent for outdoor plants and 14 percent for biologically-chemical gardening.

Sales hardware increased, plants decreased
Despite the fact that the European garden market grew by one percent in 2015, the commodity groups behind it reveals different developments. The hardware performed better than the plants. In Europe, the living greens showed a minus of 0.2 percent. In 2015, the commodity groups of biochemical gardening as well as garden furniture and gardening equipment that grew between 2.7 and 3.7 percent can be considered as the growth drivers. The only exception is the field of outdoor plants (shrubs, perennials, bedding plants and balcony plants), which in recent years have been able to gain some sales.

Spain with significant sales plus
Spain is the only EU country that showed a significant increase in sales of garden products over the last ten years. The sales in Germany, the UK and France also increased, but under one percent.

Germany important market
When examining the market sizes within the EU, it is clear that Germany, with sales of 18.1 billion euros, is the most important market. Relatively speaking, almost 21 percent of European consumption expenditure on garden products is attributable to the most populous countries in the EU. With 14.7 billion euros, France is placed second, followed by Italy (12.2 billion) and Great Britain (€ 9.4 billion).

Luxembourg, the Netherlands, Austria and Sweden, have the highest value per capita. And regarding plants, Germany is part of the top group, thanks to the across all product groups their high expenditures on indoor plants.

Click here to read the complete report with more details at www.ifhkoeln.de (In German).