Decorum Company organized the Winter Fair for the sixth - or is it the seventh? – time again. And as before JoGrow, representing the largest range, is hosting it in the prime space it has available for it.
After years of decline and even years in which many fellow growers were forced to quit or switch to other crops, green plants are doing well again. Both growers and trade are earning with green again. Green is definitely back and hip again. Some breeders even predict shortages in some product groups: "I can mention a couple right now," says John Grootscholten.

John Grootscholten from JoGrow between his plants, with the greenhouse in the background.

The trade show is modest in size and design, but a great advantage is that the target audience is approached very specifically. So no day visitors on the trade floor, but almost exclusively traders and one or two fellow growers. This results in happy faces. In addition, the moment is ideal: after Christmas, we have the 'out with the Christmas tree, in with a green houseplant’ idea, a period in which a significant part of turnover should be made. 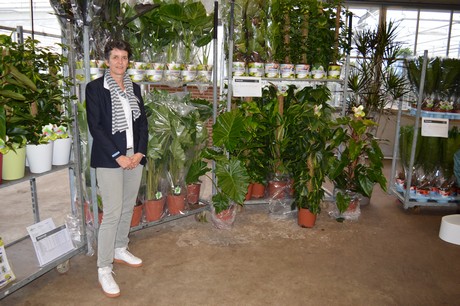 Simultaneously with the Decorum Winter Fair a trade show was also organized in the Monsterkas at the auction in Naaldwijk by growers from FloraHolland’s own sales department, FloraPlanet and Ruud Ellenkamp Plantsales. Similar in approach and design to the Winter Fair, that show also hosts many growers exhibiting their seasonal products. 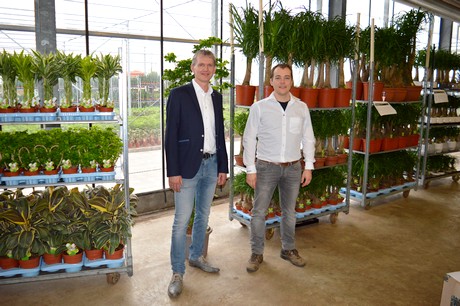 And if you’re in your car anyway (but not during rush hour), why don’t you take a drive down to Aalsmeer. Here Vireo is also organizing an in-house trade show featuring the offer of over thirty growers. Like the two others, this trade show can also be visited through Friday.

Ted Prins of Kwekerij De Palmentuin specializes in Cycas Revoluta (the palms on the cart on the left). Lately, cultivation has been difficult, says Ted: you are very dependent on the young plants from Asia, and it hasn’t been very favorable these last years. At the same time being good with plants counts for a lot and they are one of the few or the only ones who can deliver a shiny, even, perfect Cycas. 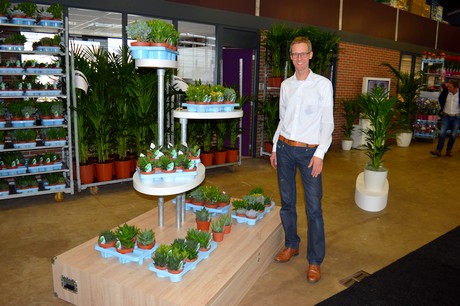 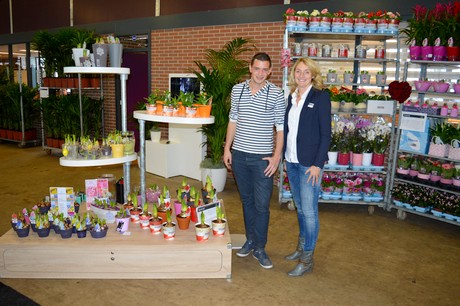 Rob Klop from Vreugdenhill bulbs & plants with Sandra Hogervorst from Kwekerij Hogervorst, representing the bulb segment together.
Unlike the undersigned, photographer Hans Korbee managed to visit all three locations - who collectively call themselves the December Tour. He again made a nice photo impression that can be viewed here.